“Help Tronesisia. I’m stuck between the floor and ceiling!”

“Get down from there, Duncan,” she pleaded again. “You’re going to hurt one or both of your keyboard playing hands (!).” 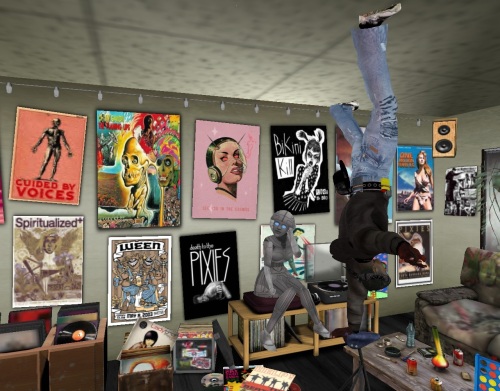 Alice Farrowheart walked into the psychedelic records store looking for her husband of 40 years. Ignoring Duncan Avocado doing a one handed stand on a bicycle seat — she’d seen enough of those kind of circus acts this week over at the bot cafe — she spotted the small, grey alien sitting on the opposite side. Oh well, she thought. At least he’s upright. I’ll ask him instead.

“Oh, ahem, what’s that?” Ingo pretended to shake himself out of a daydream, but he knew full well where he was and what he was doing here.

“I’m looking for Fred. That’s my husband.” She came closer to him. “About yea high; wears a cardigan.”

“Nope,” Ingo exclaimed. “Just us freaks in here today. We *wish* more people would come in and buy stuff. That would allow us to get better instruments, do more gigs. You see, we’re a band.” He pointed around the room, ending with himself. “Her, and him over there, and then me. I’m the drummer. You may have heard of me. Ingor Ratts. I was pretty famous back in the days.”

“No, sorry. I don’t think I have.” But she was more trying to ignore the large red rat that had just emerged from behind the counter. It reminded her of… 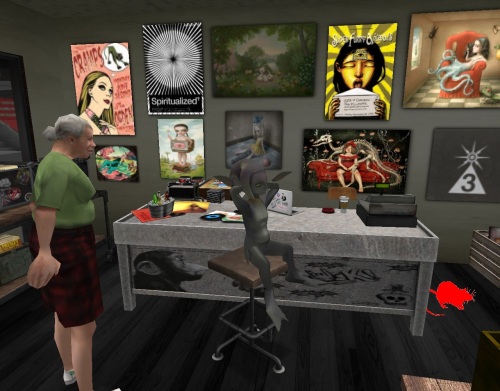 “Baumbeer!” she exclaimed while waking up. “Baumbeer was killed by the drummer!” She must get to Black Drake asap. Now where is that confounded belt?