Leaday, who has mysteriously replaced Goldie in the meantime, whispers through the disconnected line of pipes toward Peter/ Dr. Diper. “End of tiimmmme,” the part fish, part frog creature hissed.

“We’re running out of time,” stated Parasol across from Guy Benjamin while staring over at the Residents Union Back hourglass and its shifting sand.

But these were the “human” forms of cat beings Rebl and Guyd respectively, out of the End of Time caves and in Kowloon for a reason. Guy has human relatives: Grandmama and Grandpapa. Well, only Grandmama now, since the latter was done in by Axis the other day. With his Lost Cane in heaven, he still directs the good guys down below, however. Including grandson Guy. Parasol has other reasons for being here. She’s still looking for someone. Herbert Gold back in Rosehaven didn’t produce the needed results.

Across the alleyway, in the apartment directly behind Leaday, a phone rings. Satan Santa, taking his third bath of the day, cusses a hellish word, then exclaims to Frosty beside him, “You know who that is.” It wasn’t a question; no one calls here but her. Satan Santa stands up out of the tub and prepares to waddle toward the living room to answer it. Five rings, six rings… he knows she won’t let up.

Frosty is gleeful. He hopes this is the last time he has to see this ugly, hairy ass moving away from him. Too many times! 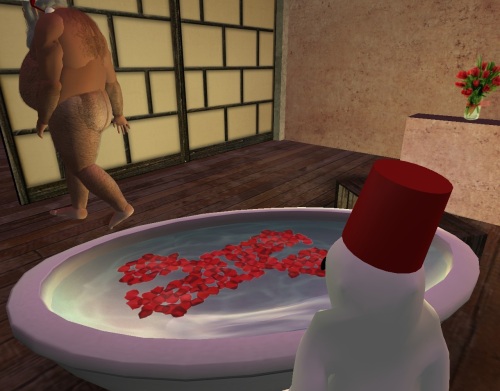