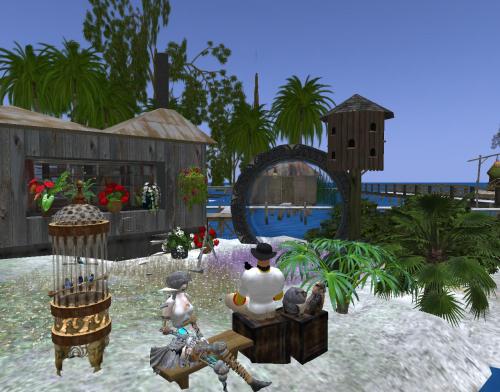 Cyberpaperdoll, facing the opposite way from Baker (but with the owls), was thinking hard, thus the whirling twirling paper airplanes above and around her head. She knew they were on different tracks now, he with his blog and she with her… well, we’ll just leave it at maths for now. And memory! She almost forgot *that*.

“Kids over here a couple of days ago throwing cans in it,” Baker Bloch spoke again. “Darn kids. Hope they didn’t mess up anything.”

Cyberpaperdoll decided not to say anything to that once more. She would be silent from now on. Perhaps “different” can become “parallel” in time.

“Well okay, then.” Baker gets up from the box, intending to go inside the small bar beside the portal in front of him. “Guess I’ll see you guys later.”