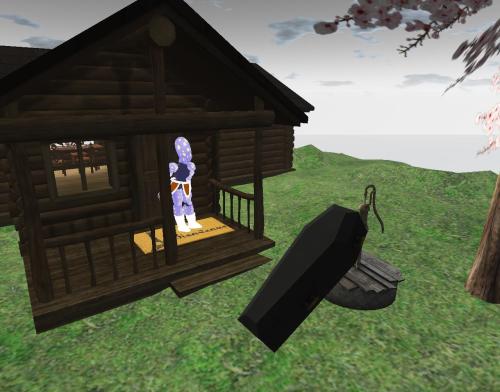 He woke up the next morning to find this basically blocking the way between his new house and his old spherical rocket ship he intended to use to fly down to the city and scout out the place. A coffin, he realized after a pause. He noted that it was held up by a kind of teapot shaped object which he didn’t recognize immediately as a water faucet. His plan of world domination was in jeopardy. The originator of Pan-Z had arrived.

He sat on a plywood cube he’d rezzed underneath a blossoming cherry tree behind it — Apples only spotted him after first seeing the coffin, the “teapot”, the tree, the cube. The coffin made a diagonal between him and his green colored nemesis. Appropriate.

Apples could barely make out the tiny voice when he announced himself, but thought it sounded like, “I believe you have something I want,” which would make sense in the moment.  The two entities representing the forces of Pot-D and Pan-Z had come face to face at last. Spore was threatening Apples with death if he didn’t get what he desired.

Apples’ senses were finally waking up. He sniffed the air. Someone or something was inside. Rotting.

“That person inside is *you*.” Clear as a bell now. 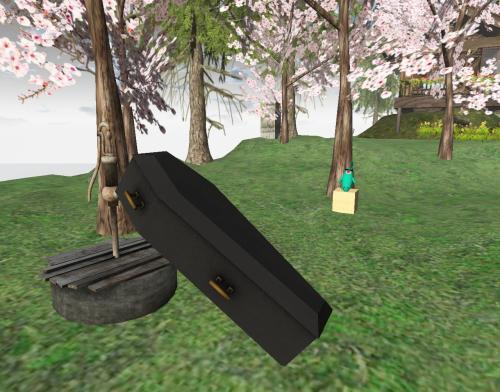