“Can’t we just *chat* for a while? Without all the eating?”

He looked at her. “I’m Supper Man,” he declared levelly. “That’s what I do. Every meal is supper for me. And all times in-between.” He keeps holding his stomach, pondering what kind of pie he wants. Oh, he’ll go ahead and order the apple and cherry both. One for each. Except Dinner Girl, ho ho, hates both apples and cherries. More for me, oh well. He laughs inwardly again. Dinner Girl catches the wry smile.

“You’re thinking about food again. Aren’t you?” Why was she surprised.

He decides to spring it. Tonight’s the night at last. “I have a proposition for you.”

Joy! She can’t wait to tell Mama Ruby when she brings the pies. Let the engagement party begin!

In a different part of town, Dali realizes the pig is a boar is a rhino and changes accordingly. Professor Art points to what parallels the CB Dylan Dresser. “The being at the center of the universe will arrive just… *there*.” Small Aloha climbs into the picture and assumes the shape of a muse to prepare.

“We can pin whatever we want to on you — *thug*. We can pin, let’s see (he looked at the sign in the distance), the Candy Stripper murders down at the hospital. Bad one there — had to haul in all the personnel at St. Marys *and* the strip club over there to solve that one. And it still ain’t solved!”

“Stop torturing me, Burt. You know I’m only in here for the food.” He would laugh except he couldn’t. More mesh. His voice was like charcoal in a BBQ pit: deep and smoky. 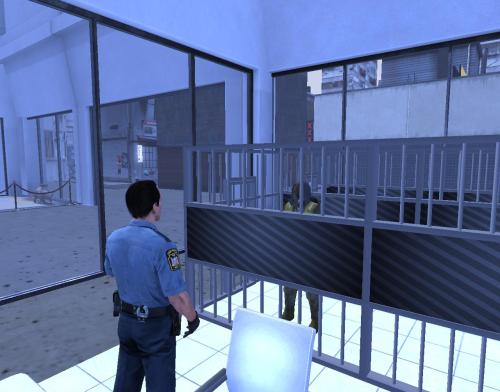 “Yeah. 4 men, all in their 20s through 60s. All between 4’5 and 6’3. All Caucasians or African-Americans or robots. Or none of the above — imaginary I mean there. One was see-through as I recall. And he wore a see-through blouse; very revealing. Apples a bouncing.” He thought back to when Harrison Ford Jett came into the station, all bouncy and see-through. He revealed a lot. The murder of Johnsons Howard was solved largely to his efforts. Then he took the apples out from underneath the shirt and went away. Burt remains disillusioned to this day.

“What’s the point of this?” Thug Jamison Restaurant was getting tired. He’d eaten a lot since he was locked up for jaywalking last Tuesday. The fullness made him sleepy. Of course he broke the law on purpose just so he could eat Mama Ruby Tanner’s home cooking, yum. Right in front of Burt. He knew he’d be booked on the spot. He had nowhere else to go, no place good to eat. “And could you bring my bed back? I’m going to have a lie down while you keep running your mouth.”

“Oh I haven’t even *started* with you,” Burt admitted. His mind scanned an overhead view of the city for more crime locations. Yes, one of ’em or maybe even several of ’em would fit Mr. Restaurant perfectly, he he. Ones we can’t solve otherwise.