It’s time you learned the ties of TILE to the Korean Channel, young Kola.”

“Kolya, actually,” the young man, perhaps the young apprentice corrected. He turned to the red clad guy on the mat beside him at the pit fire. “Who are you, sir — really? I know you’re Santa and all but that’s just a costume, a disguise even, if you will.”

The man dressed as Santa chuckled with this, jovial in the moment. “I will call you Pepi Kola you young jokester. See, Pepi? The sacred islands spread out before you from this viewpoint. And it has a heart, a Sacred Heart.” He now looks up in the sky, channeling a trance it seems. “Pink is still with us,” he speaks after a pause, fire crackling louder before them. “And Brown… they haven’t left this plane yet.” He stares back at the sea, at the islands, at the *center*. “Resolution.”

“Apprentice?” Kolya questions. He has not bought into this Santa dude’s new name for him atall, but he does likewise stare toward what he’s been told are the sacred isles, looking for a heart. He is beginning to see. 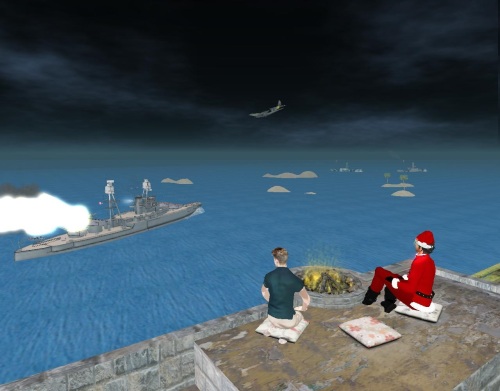 “Jesus that was loud!”

“I know. And it’s just starting.” The plane flies into the ship. Pink and Brown are dead after all.