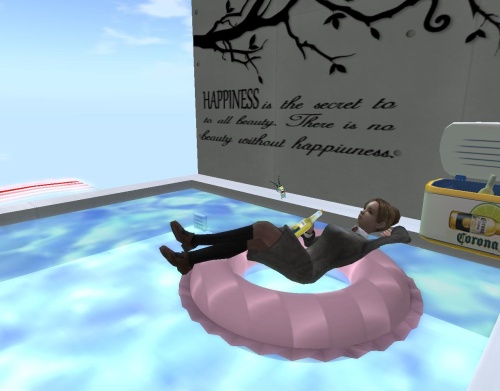 “Who *are* you?” she said to the tiny green creature on the pool’s edge beside her with the projecting, announcer-like voice. She was getting use to honing in on the frequency, like a small radio that blends into background noise at first.

“Why I’m a *friend*, a guiding spirit if you will, yes.” Spore rubs his miniature hands together in diabolic glee. Plan Z was working perfectly. Except he’s decided to trim the name down to Pan-Z to separate it from that other guy with a plan about the canal that didn’t work so well. NWES City remains in pieces. “Now just rellaaxx and forget *all* about that awful black swamp, eh? Settle back. You remain a star, don’t worry. I’ll be back shortly.” He patters off, still rubbing his hands and snickering underneath his breath. Oakley Annie floats and sips for a while, thinking of the past. 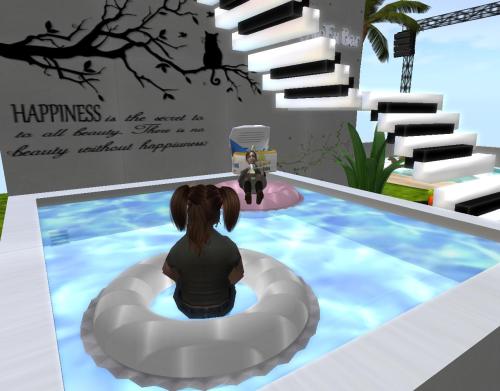 “You use to be *my* friend,” Big Wanda with new doo spoke, sitting up for emphasis.

“Well things change, what can I say.” She looked over. “What happened to your horns, the thing that gave away your sign?”

“Aww, got tired of them.” She patted her hornless head, indicating her pigtailed hair she replaced them with; kind of floppy horns if you will; deflated almost. “Looked much better on the other version of Elberta I have,” she opined about it, “the one that was going to marry–”

“Don’t tell me,” Oakley Annie beams with new psychic insight because of the brew; in the dark no more. “Toothpick.” She cackles. “*That’s* what Spore was going on about with the guy with the failed plan, ha.”

“You’re not the only one who’s dead here, Oakley Annie. I am too.”

“I know.” She almost reaches back into the box to produce a beer for Big Wanda but then remembers this is all imaginary; in her head. Big Wanda was not dead, not yet. She hasn’t tasted cool happiness at the end of a long, dusty trail.

Another sip (*ahhhh*). Spore says she can stay in his land for as long as she wants, and she has nowhere to go. Could be a while (*sip*).”Who can I speak to next? Who will fill that vacant hole of a zero doughnut this time?”

She trembles despite the good vibrations. “Mom?”