Perhaps the Kidd Tower never should have been eradicated from this cozy corner of NWES City, Man About Time thinks while flying above it all again. It’s another “what if…”, but the Kidd Tower remains in Collagesity, on the *Nautilus* continent. Not here, though, in its more natural position on the Jeogeot continent which NWES City acts as a crown jewel of — was *suppose* to act that way. Now its Black Ice is being depopulated, victim of urban overbuild. But I still have Moe’s in Apple’s Orchard, he thinks. And Charlene still has her coffee bar down in Black Ice, and Stumpy still lives with fellow head Gotham above the record store there. Gotham, he realizes. A black person in Black Ice: exactly what I need. He knows where he must head next. 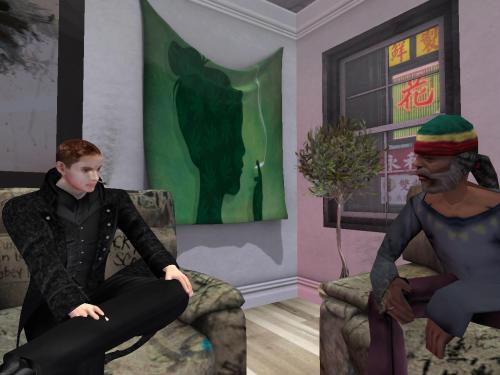 “You’re not suppose to smoke it in your *nose*, you silly person,” he exclaimed as they lounged around in his and Stumpy’s apartment and partaking a bit before heading out to… where? Not much left in Black Ice except Charlene’s coffee bar. Gotham tells Man About Time this.

“Then let’s (*cough*), go to Collagesity. Mabel will be singing (*cough cough*) at the Montana Bar tonight.”

“Really?” said Gotham, use to strange pot talk and the lies it can surface. Blue over red, as Stumpy might explain it. Or something — he can’t remember the exact phrase he uses right this moment. Also something about octaves. And doctors.

“Yeah (*cough*).” Man About Time can hardly breathe now. He had to get out of here. It was foolish for him to toke, even if only through the nose. He was still high enough to fly. He could go back over to Apple’s Orchard right now and probably see the Kidd Tower there in that cozy corner, like it never left. He remembers that Mabel wasn’t singing tonight, and that the Montana Bar hadn’t been built yet. But it will. If other things line up as planned — dominoes. “Let’s, er (*cough cough cough*), go to my place over there instead.”

Man About Time didn’t have breath to explain. He could only manage: “I’ll (*wheeze*) send-you-a-link,” which meant a teleport invite. He knew his apartment was home base — easy reach — and that he hadn’t changed it to the Blue Feather yet. Why would he?; he wasn’t ruler of Collagesity *yet*. Mabel’s dad wasn’t Billy Ray Cyrus — *yet*. Charlene the Punk wasn’t Fern the super-witch…”

“Link to where?” Gotham interjected, making Man About Time remember to teleport himself. But he ended up just falling asleep on the couch afterwards, forgetting about Gotham until the morning. He phoned him up.

“I was waiting here — *all* *night*,” Gotham protested about the disappearance and the missing invite.

“I’ll make it up to you,” came the mild reply. “Montana, I mean, Mabel is singing next week as it turns out. Everything lined up.”

That night at Moe’s Bar:

“Stumpy. Where’d you get that poster?”

They’d both find out at Mabel’s Montana gig.