After work, Wheeler returned to the theatre to watch more of Kane, studying each clap closely. Stu Umbriel mosied in, and seeing Wheeler down front suddenly had a hankering for a frozen one. Kolya (aka Ben aka Gus) came in immediately afterward — they either walked or drove over together — and then the last of their party sauntered inside as well, a person they derogatorily called Chief, because of his Indian heritage. Thing is he sat down on *top* of Kolya and kind of merged with him, Devil power showing its pitchforked ways again. Stu didn’t look over, just glad it wasn’t him this time. Chief had been taken over for sure. Maybe it’s the common redness, he speculated while woofing down another popped kernel. He watched Wheeler pop in hers. Maybe they could pop some common food together sometime, he thinks, seeing something different in the claps as well. Just keep studying, he said to himself. We’ll compare notes later. As soon as I can ditch the Devil Boys. 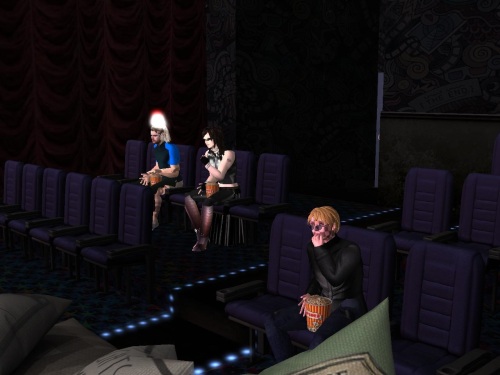 (News)papers whirl together with leaves in a perpetual dust devil down at the tracks near the tunnel, reminding us of yellow journalism… 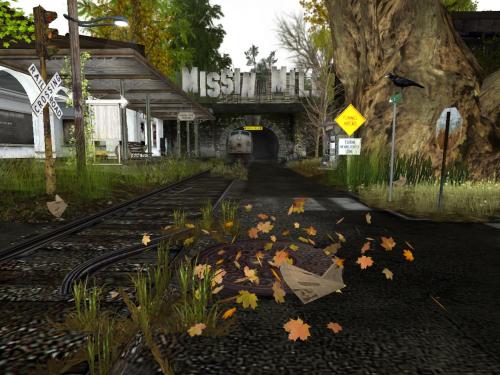 … in association with perpetually clapping *Kane* at the all day all night theatre just on the other side of the square with the “Pooping Pigeon” statue, as some locals have started calling it, blocked from our view by a mossy double oak with ivy in that picture up above. Or make that here:

And here’s Kane’s hands in the theatre, not to be confused with canes in hands, as in Dr. Mouse’s.

Checkered face Wheeler with him now, out on break from the banana, Mouse points again, making the connection. 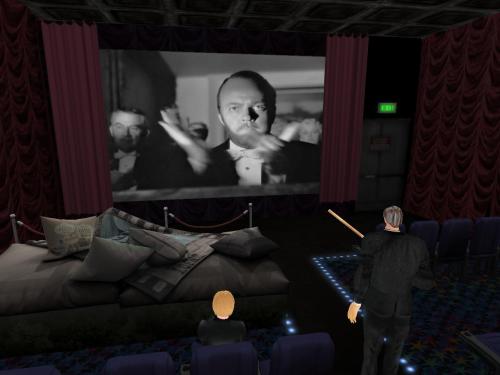 “You know, young laddie, I was going to be big. I don’t mean psychiatrist big. *Big* big, as in owning my own franchise of Pooping Pigeons. Well, someone decided to drop a big big *poop* on that idea. Came back on me, all my past, all my *medical* doctoring. I had to switch doctors, in that I became a psychiatrist instead of a physician. It was just that dramatic a change.” He pointed his cane in the direction of the tunnel and the train station now, past the statue with the pooping pigeon on its shoulder that triggered this whole soliloquy.

“Gee spot — right over there. Came in the tunnel. The Asylum sits on top of it.”

“Did you know,” young Peter File spoke absentmindedly, not really paying attention to the doctor’s ramblings, “I can balance this little paper hat on my nose?” He blew at it with his mouth; the object didn’t move. He sat up, looked at the doctor as if just waking up. “Paper,” he spoke more seriously, taking in the landscape. “We’re in *Paper*.”

“Been here for a while, yes. That’s what I’m trying to tell you. Things *changed*.”