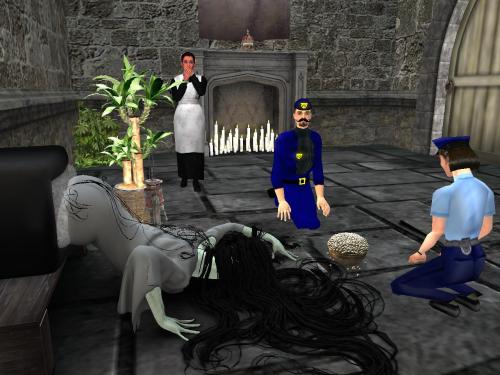 “Remember, heh, remember the Pickleland static murders, Wanda? Good times. Back then you were known as Michelle Roundup and, me, Bill Mustardgas. Good undercover work. We nabbed those snowmen.”

“And got some nummy popcorn out of it too!” she joked back, but then became serious. She wasn’t with Tank any longer, either professionally or personally which, for her, usually go hand in hand. Dimmy was the exception, and Marilyn is about to solve that problem. “Tank?”

“Yeah?” He waited with baited breathe. Were they a team again? Had he done good by telling her that Dimmy’s new pink lipstick was actually Marilyn’s new lipstick and that Dimmy wasn’t applying it himself, despite the rumors about town, rumors planted by Marilyn herself, still trying to get back at Wanda after all these years. This was still a black and white situation, which meant black vs. white, which means good vs. evil. Trouble is, no one knows who is who and which is which. Both witches in a way to everyone around. East vs. West is another way to put it.

“I think we should study static again.” She met his eyes. She was dead serious about this. “You take, say, Tennessee, and, me, Kentucky.”

All Tank’s effort has paid off!