Some say he looked like Jimmy Stewart, sitting behind his desk with the guns in back as they entered. But they were just for show: R.V. never toted a pistol himself. He believed in the basic decency of man, and that issues, however dire on the surface, can be reasoned through and ended without mayhem or bloodshed. Perhaps his reward for this positive viewpoint was the finding of Helen, our Mayan Marauder, our Publius Enigma, close to public nudity but not quite there, not quite breaking the law either, then, despite the continuing opinion of deputy Andy. “We agree to disagree about the matter,” he settled the matter with his sidekick, his buffoonish underling who *always* carried a gun albeit one without bullets. Sheriff R.V. saw to that. 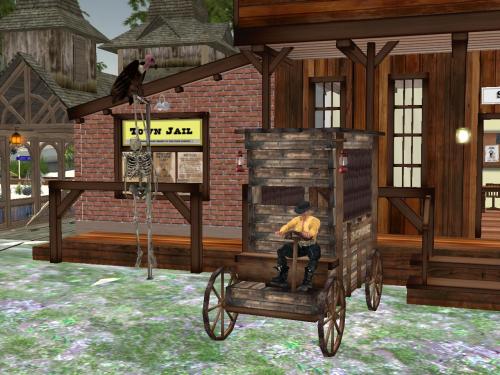 Skeleton outside and perched vulture — just another show, mainly for the tourists to this here retro town of One Pink, also known as Lips, or that’s what the post office wants to retain as the official name. But the dispute, some say, is just part of the antique feel of the village, as things often happened like that in the Wild West of olden days, often settled — again — with mayhem and bloodshed before a single name could be selected. If a settlement wanted to call itself Bradshaw and others disputed it, just kill off all the ones who want Bradshaw. Sheriff R.V. is versed in the olden ways; he’s a student of law enforcement in the past. He studies to *escape* it, though, unlike some who want a return to the wildness, the wilderness. 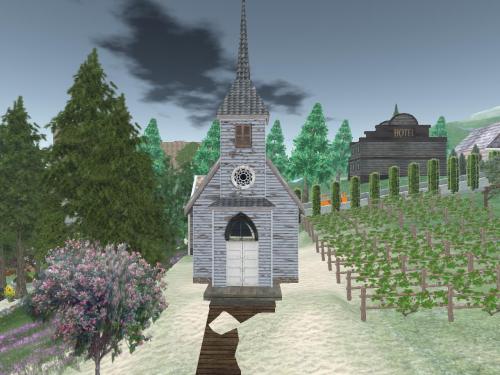 Aunt Beatrice is about to get out of church, and R.V. needs to pick her up since she doesn’t like walking home in the sun. Ruins her complexion, she says about our nearest star; a flaming ball of poop, she sometimes calls it, especially when a new wrinkle develops on her 60-ish skin. No one really knows her age, and all that use to are dead, some say: killed — by Beatrice herself in her extreme vanity. Sheriff R.V., an actual nephew and not just a namesake one, knows differently. “That’s just her rough exterior,” he defends to others. “She fights the elements all around her, people, place, things. *Circumstances.* But inside, deep inside — somewhere — there’s a decent, wholesome person that loves the world, that loves her relatives — the few that remain — and, above all — and I think this is very important even though we don’t share the same faith — loves God.”

The police department’s steam carriage stalls out on the railroad tracks. Looks like R.V. is in a heap of trouble again, especially since Beatrice will have to walk about 100 feet from the front door of the church in the scorching sun to get here. R.V. figures he might actually need a loaded gun this afternoon to fend her off.