Actor Lemont Sanford demonstrates how perfectly he fits the role of Blackbart in the current production of Sunklands photo-novels by laying in this pool of water exactly his length, head against stone and feet brushing wood. “Like a glove,” he speaks up to the director in charge of casting, mixing idioms of sorts.

“Well, this is where you’ll die so that’s nice.” He tries to frame the shot with his hands. “Yes, yes. Nice fit for sure, hmm. Now, how are you with claustrophobia?” he says down, knowing a coffin scene would also be involved.

“Dub’s Jungle, eh?” said D’Eddy. But he was looking a different way now and not where neighboring Freddie was pointing, D switched with B. He becomes lost in his thoughts…

“Well guys, I’ve got to go visit my sweetie up in Dairocha. See you soon. *Losers*.” 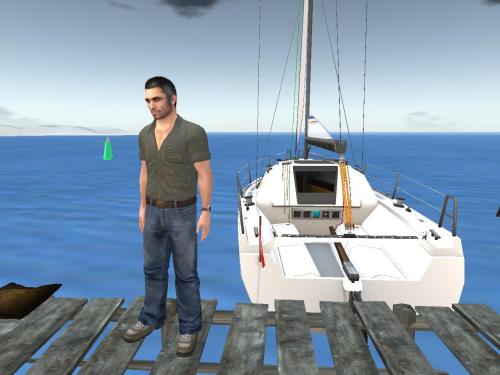 He hopped back in his Bandit 25R sailboat and was gone.

Simple fishermen Luther and Al, formerly sharing the pier with him, didn’t say goodbye to Blackbart. They just sipped whatever was in their bottle and can respectively, thinking about the Starfish Lake or Sea arm they live on and the differences between above and below. Elbow to hand: White Elvis was all the rage and bottles were still in hand, like with Luther. Bottleball remained more popular than basketball, with its professional leagues not yet desegregated. Elbow to shoulder: Black with White. Shoulder to shoulder, like cans in a 6-pack, ready to be purchased for drink, 6th man included. Let’s see, I think Al has a Sprite, both lemon and lime; green and yellow. And that’s where we need to head next. But first…

“There’s no women left at Dairocha,” opines Luther, then knocks back a long one. “Not free ones anyway, you know what I mean, you know what I’m saying, heh heh?” He elbows Al in the ribs, who takes it good-naturedly and even elbows him back a bit. Must be a different location, Al thinks more logically than his backward fishing partner. Blackbart is hiding something. 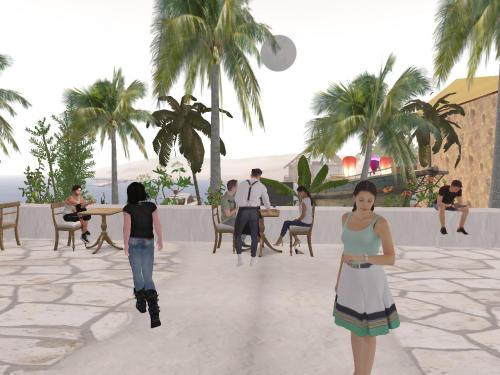 Tessa, his Tessie, shows up, breaking his reverie. “Sorry I’m late. Setting up a castle in Lebettu. I guess you’ve heard.”

Eddy takes a breath, resetting himself. “I’ve heard there’s some unsettling stuff about the landscape around it. Sorry about that.”

“It’s okay.” She also takes a breath, recalibrates. They become related again, cousin to cousin. Our Eddy; *her* Edward. She takes a seat.

“Just having a daydream about your boyfriend,” he says, looking over at the tree again in the distance. Bud’s. “Talking to some simple fishermen on a pier, one more backwards than the other. In one arm, a fishing pole. Common denominator. But in the other: difference. One was drinking out of a bottle and the other a can. Strange fantasy, eh?”

“It’s the history of the place,” she says. She also thinks of the arm they’re situated more toward the “shoulder” of, Greek village here included with jungle, tame to wild. More oppositions, horizontal instead of vertical in that case.

After ordering a Sprite and a Coke, they talk of Starfish Lake (or Sea) for a while, then: “Oh… I almost forgot to tell you about Manassa.”

“Bull Runs?” Eddy guesses wrongly here. Tessa rolls her eyes to the sky, trying to fit that angle as well in her imagination. Both have wide ones. Yd. Yellow down. She decides it didn’t fit. Not quite yet anyhow.

“No,” she says. “Manassa *singular*. Without the ‘s’ like in the battle place in Virginia I believe.” She knew it was Virginia but didn’t want to seem too show-offy. She also knew details about the differences between Bull Run battles no. 1 and 2 but didn’t say anything about that for the same reason. No need to make Eddy, her Edward, seem lacking in comparison. They must remain even. They must remain as if cans in a 6 pack, 6th man included. Basketball not bottleball, although both involve a lot of cutting. 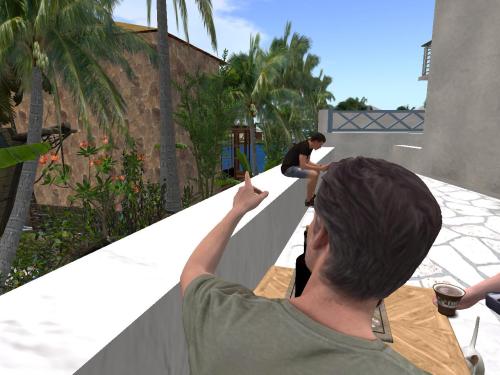 “Blackbart,” Freddie muttered in front of them, still pointing away from the jungle, though. “Blackbart,” he repeated, voice as even as before; no wavering in conviction. Eddy, her Edward, heard a speedboat in the distance. Blackbart, the *actual* one, had returned from wherever he came.

“Hello boys,” he spoke to Al and Luther from behind this time. “Miss me?” Their backs remain turned to him, as if they weren’t even alive, or were figments of his imagination, another Yd one. Yellow down.

He peels a lemon and is gone, WOOOSH!

Trying out the Lebettu castle location again. Also have Fordham’s Collagesity still, although without the 3072 square meter rental connecting the high Temple of TILE (1024 sq meter parcel) to the lower rest of the town (8192 parcel). Lebettu: only a 4096, thus saving me 30 dollars hard US cash a month in the overall projected downsizing. Choices choices. But it’s all good.

The land around the castle is a little unsettled right now. How it shapes up could swing the deal either way.

Also: What to do with the Temple of TILE and all the Collagesity collage galleries? Storage? Could be.

Whatever happens, Nautilus will remain a focus and an emphasis. The blend of Our Second Lyfe with First.