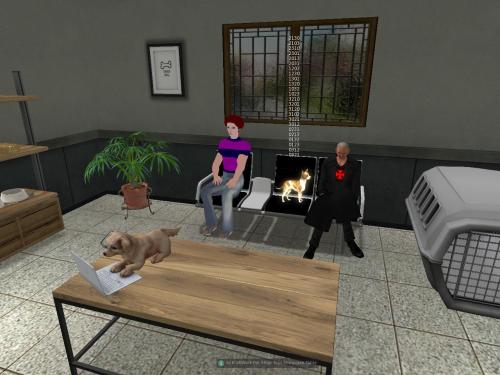 Unexpected development at the vet’s office. Another numbers crunching dog was already there, typing on his laptop as fast as possible. The screen shots changed at a rapid, even amazing pace. But although there were a dizzying amount of different angles, the location was obviously the same. The Red Room, sometimes known as the Red Bathroom. Also sitting Norris had found it after a long long search.

Johnny Black tried to remain as calm as possible. “Your dog?” he said over. “Talented,” he added.

“Not my dog,” replied the man with the bleached out face. Don’t look at me, he thought. Anywhere but me.

“Oh.” Johnny Black had a rethink. Norris was obviously studying what the labrador was looking at intently. Not his dog, but Norris was fascinated with the information it was receiving. Another Universe was already in place here. Removing the numbers from his own dog wouldn’t work! Darnit! Drat! Wheeler won’t take this well, he knows. He digs further to find out the source of the problem. “Interesting room he’s got there. Very red it appears.”

“Red Room, yes. I’ve been… searching for it…” Norris knew to shut up.

“Red Room you say. Is that the same as the Red Bathroom?” Johnny Black was testing Norris to see if he even knew of the latter, and that it might be the same as the former, given the right circumstances. Because everything hinged on that association now. Everyone in a high enough circle of information knew the Red Room was ultimately inaccessible. But a red bathroom — could be different.

Norris dared to look over, understanding the same. Their eyes met, their eyes locked. This was a race to the end with the loser becoming dead. Norris stood up, Johnny Black stood up. Norris took one step forward, so did Johnny as he gathered up the dog to leave. Norris took one two threefourfivesixseven. He was running out the door down the street. Johnny was right behind him, or right beside him. Maybe in front, even. Both had to go to the bathroom and it was urgent in each case — couldn’t wait. Just over there next to the swamp…

“Next!” Oh frick, thought Abby the vet and vet assistant both today, seeing the empty waiting room besides Sparkles. Another owner on the run. She hasn’t got time for this.