“I had a dream about Dub again last night. Talked to him over on that couch again.”

“Yeah. Asked him about the jungle, how I get back. He picked up a guitar with no strings.”

“Yeah, and he played it, but it sounded like a recording, with the echo and all.”

“In a way I suppose.” She reached over, took his hand. If she could only play the strings to *his* heart.

“It must have been that book you were reading. By the hot tub. Up above the main pool.”

“Was the jungle mentioned specifically within?”

She thought back. “Can’t recall (that).”

He sipped on his Russian Roulette, borrowed from her earlier. Said her stomach was a little upset from before. The tension, she excused herself. Both blamed each other, and then, afterwards, themselves.

“Are you going to go back into the box now?”

She thought about it. “I’ve decided… that 777 dollars is quite reasonable for something we can, er, style together. I don’t want to be a prisoner. I want to be a woman. Shackles removed.” 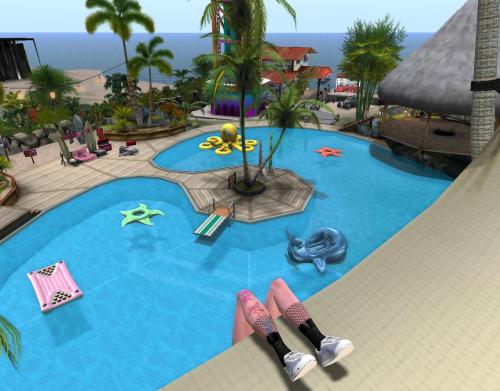 “I see.” Arthur Kill thought about this. Liz remained the ultimate goal, how to get there, how to *make*. Singularity awaiting, even looming by this point. A black hole and white hole together. Ylem.