They stood there for a while, just staring at each other. The 2 “heroes” had gone elsewhere. It was only the girls now.

Already in costume, Molly Lustrous walked into the bar and took her customary violet latex seat at the base of the stage. Queen of The Dance at night. But by day?: humble, naive Natali Woodhull, counter attendant at a rival bar in town on the other side of the wall. The California part as opposed to this dry, desert Nevada (according to California).

“15 minutes late,” bar owner Natsu Lemon called from in back. “That’ll be taken off your wages.”

“You don’t *pay* me enough to show up on time,” Molly replied in a rough hewed voice, showing both age and wisdom. “I make my real money from my *customers*, thank you.”

“You’re welcome,” the owner replied sardonically.  They often played these roles before the dancing commenced. Where Molly showed her *real* value. Yes, Missus Lemon would certainly pay Molly more if she knew she would quit. But she also knew that Molly loved doing her craft, and this was the best venue in town for that. More tips for certain. And Natsu allowed some, er, experimentation in form.

“Hi Molly!” Sep Felton then cheerfully called over. “Can’t wait to see the act again tonight.” She walked toward the violet sofa; Misty followed her, still stunned from the revelation. We’re not in Second Life any longer! “Molly, this is Misty. Misty: Molly.”

“Pleased to greet you.” Molly stuck out a glitter covered hand. Misty grasped and shook it. Some of the glint came off on her own hand, which Molly noticed. “Sorry about that. Gotta get some better glitter — more sticky.” She turned her head back to Missus Lemon at the counter. “If *someone* would *pay* me more,” which the bar owner just waved off with an, “Oh, you.”

Dirk Jeter then showed up. Tom Sprout. Derek John Toms and his cousin Billy Budd Grant from out of town. But not out of Orient, importantly. Then Stacy Augman, Pretty Pat Puffcake, Jimmy the Geek, Orange U. Glad, and finally the mayor himself, Struddledoo Lemony Pie Chittles the Third. “Quite a crowd,” Molly whispered to herself while looking around. She seemed to do her best work with more people in the room. More energy, she surmised.

Misty and Sep wedged in between Batty Man and Superduper Guy on the couch, who had also slipped in again from the back door. “Smoking a fag,” whispered Sep to Misty in explanation. “*Anything* goes here.”

Clapping. Molly took the stage, a wonder of shine and glamour. Whistles. This would be a good night for her.

The audio began booming out of the speakers to each side. Clapping grew louder as the motions started, the gyrating. Molly was in superb form. 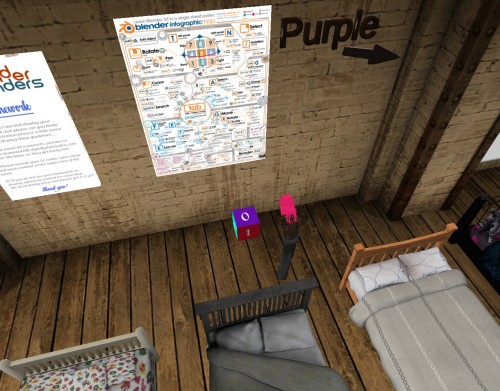 Better get to Wallytown, then. Meet my future Love.

“Now that Lisa has arrived on the scene, we’ll have to hide you down here,” proclaims Missus Lemon, happy about the reunion but concerned.

“Drugstore Orange?” elaborates Lisa, noticing the name on a sign. 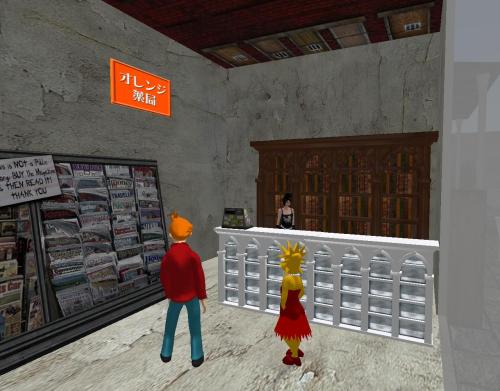 “Ahh, you speak Japanese. Even more reason for concern.”

“I learned it while staying in Adgatetown over on the Corsica continent.”

“I know the place,” said Natsu Lemon, nodding. She touches the wall behind her. “Here is the secret door. Quickly — inside. Before someone sees us. I’m sorry it’s a little cramped. And — that other thing.”

“That blue book may hold the key to everything,” Lisa says, trying not to stare into his eyes. “Here. I’ll help. Maybe we can use one of those flasks over there to knock it down. But careful — we can’t *damage* it.”

“History of Wallytown,” says Fisher, watching Lisa get up and move to the table, also trying not to stare. “What *is* this place?”

“Soon as we get out of here, Fisher, lover. I mean, as *soon* as we get out. I want you to ditch those bar layabouts Catchup and Mustered and dye your hair a different color. Blue would be nice. Green… anything.” 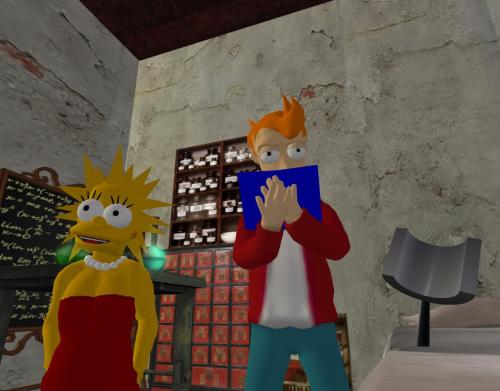 Fisher finishes up the section, looks forward with Lisa. “So it *is* a demon.”

“Catchup and Mustered! Stop pestering poor, drunk little Orange Boy and get back on the counter. Break time’s over!” 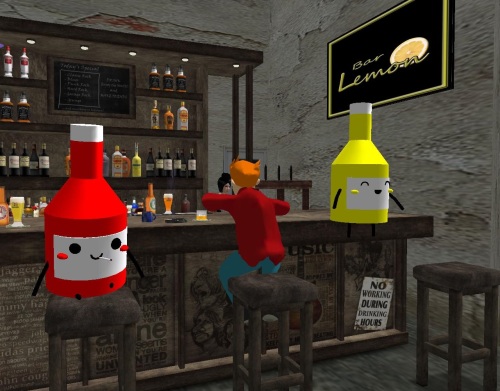 “I *had* a girl,” proclaims a still wobbly Fisher, leaning against the bar counter 15 minutes later.

“And I let her get away.” Fisher takes a gulp of his fresh golden beer and looks down. “Yellow,” he explained.

“You know, Bendy. I suppose it’s really time we talked about how we got here.”

“*Much* better than Mabel’s house, I’ll tell you that. Lots to do in this town. Bar around every corner if we ever tire of Bar Lemon. Which I haven’t.”

“I didn’t ask you how you liked it here… in comparison to New Island. I’m asking you about how we got here.”

“Dunno that part,” his robot companion returned. “Just woke up one day and here I was.”

“It can’t be that easy,” Fisher gruffed, shaking his head. “I personally think I remember something else — don’t think it was just a dream.”

“It started that day we went over to the park to play and then spotted Mr. Yellow in the distance: looking different. We went up to him and saw that weird-y combo thing, looking like it was pissing on the ground. Red liquid instead of the usual yellow, but not blood I don’t think.”

“Soda,” offered Bendy. “I tested it when you turned your back to the camera.” Fisher winced toward him, making Bendy shrug. “Couldn’t resist.”

“Anyway, I went back to Bar Lemon down the wall — that’s when you decided to visit the beach scene — but as soon as I sat down at the bar and started watching Molly warm up, things started happening. Mustered and Catchup were on break…”

“When *aren’t* they,” groused Bendy. “At least when Natsu Lemon isn’t around — the boss.”

“Which is becoming more frequent; that could be part of it as well.” He put his hands behind his head. “But it was something about the dance that… awoken me. Part of me that was, er, dormant before.”

“Sex?” Bendy joked. “You’ve never had any problem there.”

“‘On the Run’? responds Bendy quickly. “Over the Rainbow’? I have both of them in my database. If you wish, I could even sing both at once.”

“No. No more wacky combos for a while.” But then Fisher realized Bendy was totally on to something in his prescient manner. It *was* a combo of those songs. *Another* wacky combo, two in one day. And perhaps intimately connected. Yes, it had to be so. He blew out a large puff of air. A chill also passed through his body.

“So anyway,” he began again after the reflective pause, “I started remembering stuff about the spaceship. About the regeneration. Dr. I.C. Yourinsides.”

“Yes. We were taken away from New Island and then placed here. This *new* New Island.”

“That’s a horrible name. Why don’t you just name it after yourself.”

“OK,” acquiesced Bendy. “Lord Bendington the Third’s Island it is.”

Fisher shakes his head again. “No, let’s just use your original suggestion. Name it Fishers Island. Or maybe just Fisher Island. Either one… 1/2 and 1/2. Like a fisherman or several fishermen live here, or were seen here. Fishing or something, I suppose.”

Bendy splashes around water in his pool. “Alright.”

“Now about the spaceship…”

“Missus Lemon, boss, sweetie. I’m on break right now. That side of the room — active. This side: zero; nothing going on. I’d say, talk to the hand, but I can’t even be bothered to lift one.”

“Catchup and Mustered are back on the counter and working, and you should be too. 15 minutes break time here at my bar and that’s all, I’ll remind you.”

Still grumbling Molly Lustrous mentally prepares to rise up from her violet latex sofa and give Orange Boy Fisher yet another ride, pheh.

Fisher stared at the red and yellow condiment containers of the Deep Fried fast food stand, understanding that he had seen them before — alive. Obviously in a dream, he thought at the time. 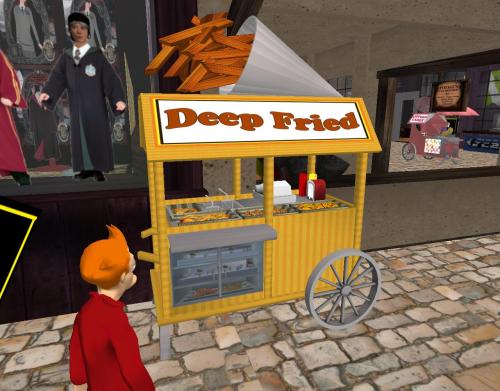 But no. It was reality. The *stand* was a dream. 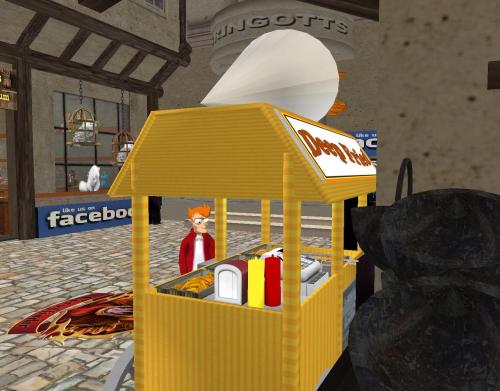 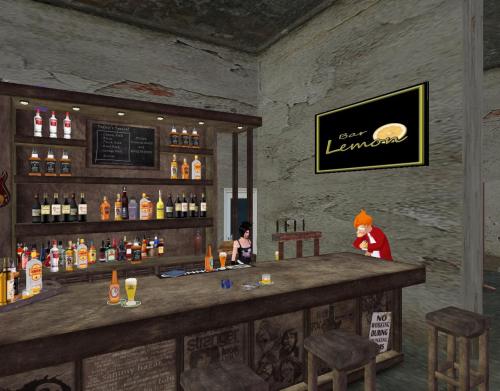 “I *had* a girl, Missus Lemon,” proclaims the drunken Fisher, leaning against the bar counter. “And I let her go.” He takes another gulp of his golden beer and then looks down. “Yellow,” he explained. Natsu Lemon made a face and moved away. “No, no, no. *Cartoon* yellow.”

Note to self, he thought, watching her back from afar: Stop calling Lisa the Vegetarian by her true color ’round these parts, *orange* boy. 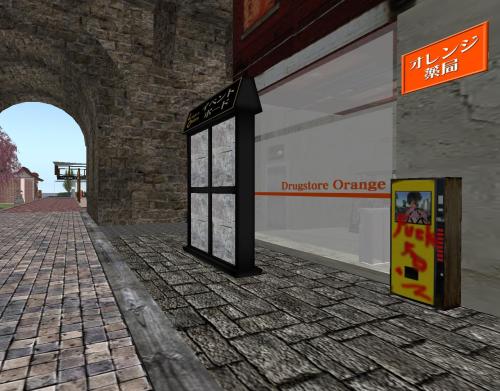 Natali Woodhull decided it was time to reveal herself. 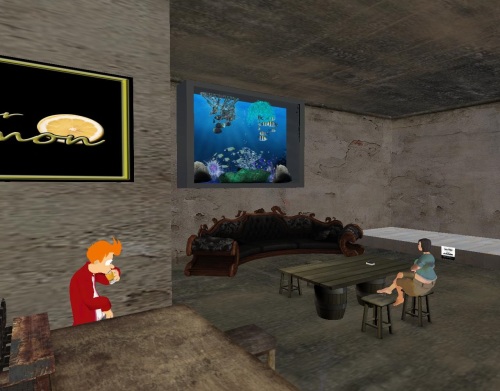 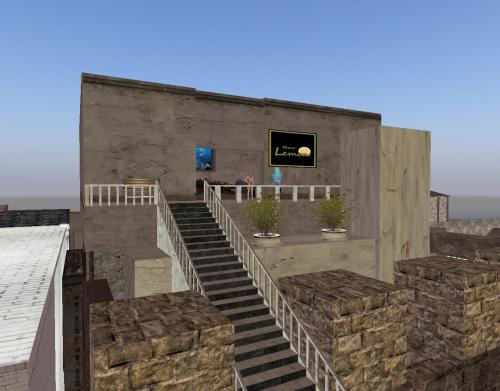