Jack Torrance: I like you, Lloyd. I always liked you. You were always the best of them. Best goddamned bartender from Timbuktu to Portland, Maine. Or Portland, Oregon, for that matter.

Been looking through this…

… and came across this.

If you know The Shining movie, you certainly remember when Wendy found what Jack had been merrily typing for days. Just one line over and over and over: “All work and no play makes Jack a dull boy.” Turns out by that time the scrapbook hadn’t inspired Jack to writing significant fiction but might have instead driven him over the edge. But is this what it seems in the movie? There’s significant evidence that parts of the movie are actually externalized versions of the novel he is writing based on this scrapbook. A prime example is mentioned in Kearns’ page on the Tuesday section of the movie.

What clued me in personally about a story within a story going on here is that Wendy, when approaching Jack finally hard at work on his story, typing madly away in the cavernous Colorado Lounge of the hotel, says hello to him *twice.* Here’s the dialog, culled from Kearns’ site (thanks once again Juli!):

Jack rips his page out of the now gray typewriter.

She leans in and gives him a kiss.

WENDY: Get a lot written today?

After the second greeting, Jack’s demeanor changes. He becomes more sullen, and asks her not to disturb him again while he’s working. What’s more, a *chair* has obviously disappeared from the wall behind him, seen clearly in the shot of Jack just prior to this. Again, as with Danny’s tiger poster discussed in “strange? 02” (LINK) and many, many more examples throughout The Shining, this disappearance is *not* a continuity error, but purposely inserted into the film by Kubrick at this particular juncture for a specific purpose. There appears to be 2 Jacks here (and 2 Wendys), the real Jack typing the story in the Colorado Lounge, and the Jack *within the story*, also typing, and also more irritated by Wendy’s intrusion. I would venture that the Jack who typed “All work and no play makes Jack a dull boy” over and over is the fictional one within the story. The real Jack is merely typing the story itself. But since the real Jack is also in a *fictional* movie… well, we’ve returned to the idea of nested dolls, and which reality is real.

And overlayed on top of this is the bizarre twist that actors named Jack (Nicholson) and Danny (Lloyd) play the Jack and Danny characters in the movie, with these fictional names originating in Stephen King’s source book and otherwise unconnected to the real names. Kubrick himself mentioned this coincidence (synchronicity, really) in an interview with Michel Ciment when speaking about the music of the film:

… most of the music in the film came from the Polish composer Krystof Penderecki. One work titled Jakob’s Dream was used in the scene when Jack wakes up from his nightmare, a strange coincidence. Actually there were a number of other coincidences, particularly with names. The character that Jack Nicholson plays is called Jack in the novel. His son is called Danny in the novel and is played by Danny Lloyd. The ghost bartender in the book is called Lloyd.

Here we return Lloyd the bartender, then. 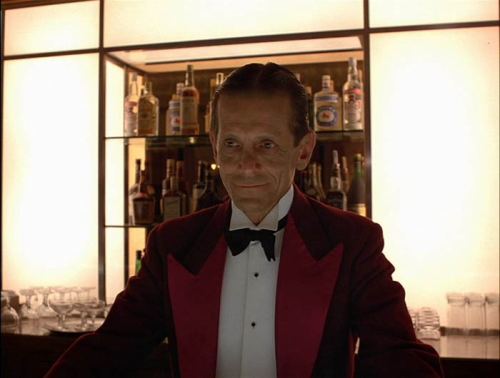 I’ve seen several Shining researchers mention the additional coincidence that this bartender is serving Jack a *Jack Daniels* drink, comparing it to the union of father (Jack) and son (Danny, or Daniel). Here we might also be talking about an incestuous relationship between the two; there’s actually a considerable body of evidence for this, although the basic theory is rejected by Kearns at least. But there’s also such evidence as Jack talking about his relationship with Danny while drinking Jack Daniels in front of Lloyd, saying things like…

I never laid a hand on him, goddamn it. I didn’t. I wouldn’t touch one hair on his little goddamn little head. I love the little son of a bitch. I’d do anything for him, any fucking thing for him.

Back to the scrapbooks and The Shining’s deleted scene….

Filed under Qbrick, Stanley, Shining, The

Sharieland’s Sunklands and its Gaping Mouth Rock, etc. is now directly attached to The Shining. How could this be? Palmistry, The Devil tarot card, and the picture at the end of The Shining are all linked through Jack’s band aid, which becomes my band aid. It heals a poisoning, like lead poisoning, like poison ivy poisoning, but a wound of the heart (or head?) [line]. The pencil warned me (jabbing) what was just around the corner (co-worker split). I was so happy, having created my Sharieland photos. Then: shock. 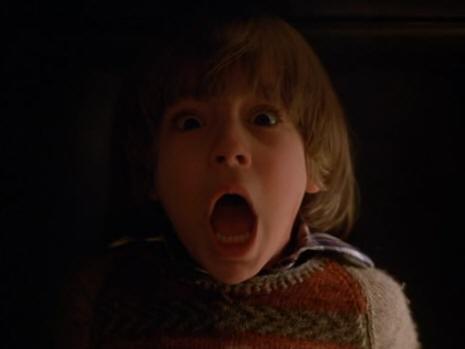 Result was getting a student (wonderful!), and co-worker moving to a different location, in essence. Also probably me retaining my office. So what’s to complain about?? Only the great unknown. 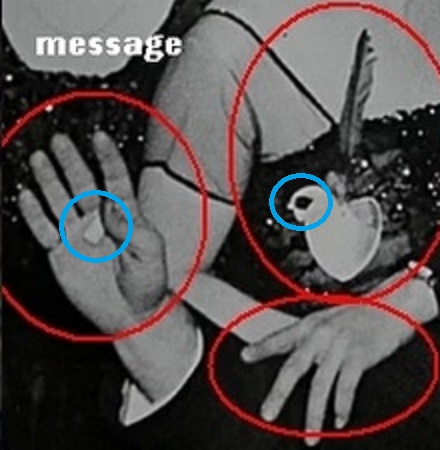 Alignments are being made in this game of Omega Point considerations. Alpha (Oz) is seen to be corrupted by Omega (Shining). The whole thing must be lifted up and purified.

In “strange? 01”, we examined a good number of film effects in Shot 61 of “The Shining”, some of which clearly seem to be beyond the norm. Here is a composite picture of the anomalies I created at the time.

In studying the shot further, I saw additional lighting effects, but I think we may have hit the major ones in “strange? 01”. I believe the light shooting out of the psychiatrist’s head as the background tiger’s eyes realign with the top of her coat is obviously the first major effect of the shot, about 6 seconds in. The 2 spots around the dr.’s head near the end of the shot, appearing right at its last spoken word (“strange”) would be the final major effect. These form the frame to understand all else within.

Still don’t believe I’m on to something here, and these are mere film discolorations? Shots 61, 63 and 65 all have the same camera angle, and involve the psychiatrist asking Danny various questions about the vision of blood pouring out the Overlook Hotel’s elevators he experienced while brushing his teeth that day. Shots 62 and 64 switch to the same closeup of Danny, as he fields her various questions. In shot 65, which is continuous with 61-64 before it, the psychiatrist asks Danny what happened just before he started brushing his teeth. In shot 66, Danny replies that he was talking to Tony. Here’s what we see when we return to the psychiatrist, in a close up in shot 67. The blackboard in the background has moved, and now covers both tiger’s eyes!

In shots 63 and 65 the tiger appears as it does in the first photo of this post from shot 61, with the blackboard askew and only covering part of the tiger’s right eye. So it’s obvious that Danny’s spirit accomplice Tony and this poster tiger are suppose to be equated with each other here, with the link being well-known cereal character Tony the Tiger. The psychiatrist then asks who Tony is, and Danny’s mother Wendy rather nervously explains that it is Danny’s imaginary friend. We only see the blackboard cover both tiger’s eyes during the several closeups of the psychiatrist during this sequence, and at the end of the movie chapter taking place within this room, when we return to the same camera angle as shot 61, the blackboard likewise returns to a state of askewness.

Why did Kubrick set all this up? In looking at the whole scene in Danny’s room further, Wendy’s eyes also don’t appear right at times, like one has been “artificially” enlarged, almost a popeye effect. 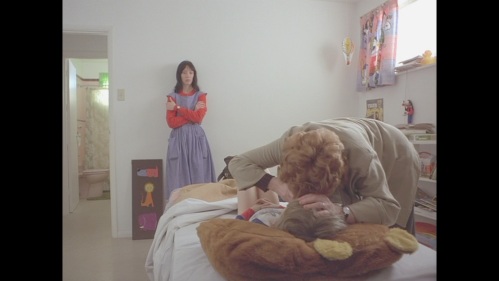 I’m reminded here — and perhaps you the reader are as well when reading this observation of mine — that Shelly Duval played Olive Oyl in the movie Popeye, which was being conceived at the same time as the filming of The Shining.

Filed under Qbrick, Stanley, Shining, The