On the *other* side (north terminus) of Cherry Avenue we have this man with his hand in the middle of a sewer top. Is he a guardian of the underworld, perhaps the one directly beneath the gray surface of Cherry Street and its numerous islands?

He must know about the 2 sets of twins from the other side of his 3/4th mile long avenue. He must somehow be in control of the islands. Many Islands.

“What are the names of the fairies off Cherry Avenue, infesting that creek or brook?”

What an odd thing for that woman to do. Reminded me of my sister.

Lānaʻi (/ləˈnaɪ/; Hawaiian: [laːˈnɐʔi] or [naːˈnɐʔi]) is the sixth-largest of the Hawaiian Islands and the smallest publicly accessible inhabited island in the chain.[1] It is also known as Pineapple Island because of its past as an island-wide pineapple plantation.

In 1922, James Dole, the president of Hawaiian Pineapple Company (later renamed Dole Food Company), bought the island and developed a large portion of it into the world’s largest pineapple plantation.

Pineapple, Alabama has already been mentioned in this blog. The tiny town has a Banana and Cherry Street. Does it give further clues? Most likely. Perhaps the whole Cherry-Lime area of Ashville is actually called Pineapple. Or was (or will be).

And in reading the above link concerning Pineapple, see that I’ve already mentioned Cherry and Banana Street in this, and even provided a picture.

I’m still uncertain about the relationship between Apricot Bone and Sgt. Pepper. Is Apricot Bone a pretend band as well? I think you said before that it’s a Kinks variant band, like they also could have created in 1967. Instead they created the Village Green Preservation Society. “We are the Village Green Preservation Society”.

Apricot Bone is something else. Related to Pine Apple, Alabama and its Banana and Cherry Streets but more. Apricot is King Tull… 333. A tropic fruit. 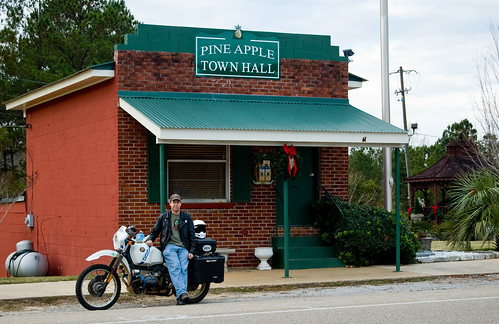 The Goat Whisperer 4y
And this is across the street.
I’m not sure I understand completely unless there’s a Rum Avenue nearby.