On the attempted return trip back to Collagesity, Baker’s dog ship began to loose altitude about 20 ticks past Toledo. He had plenty of neutron fuel — no problems there. But he had no choice but to bring her down in the most acceptable space and check the problem out. He chose what he knew would be the soft desert sand outside of what he originally thought was the Jacksboro space station again. This was a different sort of space station, however, a different compound using the local lingo. This was Ohio.

Seeing no outward sign of harm to the ship, he decided to seek local help if possible. The Martian night was coming on, bringing extreme cold. The dog’s heating system also seemed damaged. He couldn’t take a chance. 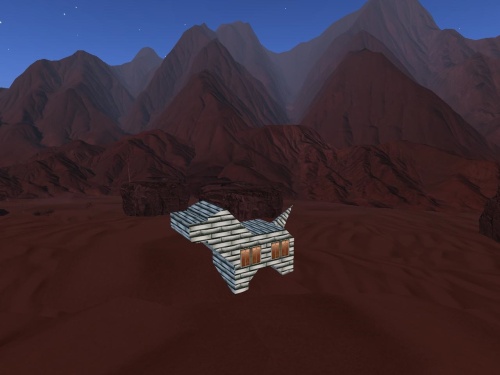 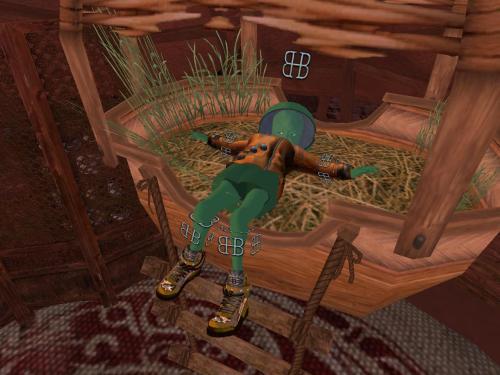 Mabel assumed a more provocative pose as Baker went through one of the iris lens doors of the compound to her right. She had heard the landing in the desert and steeled her nerves. But upon entering, the Truth Tree blocked Baker’s vision of her in the hutch. He instead moved to the north and through a colonnade, still unaware of her presence. 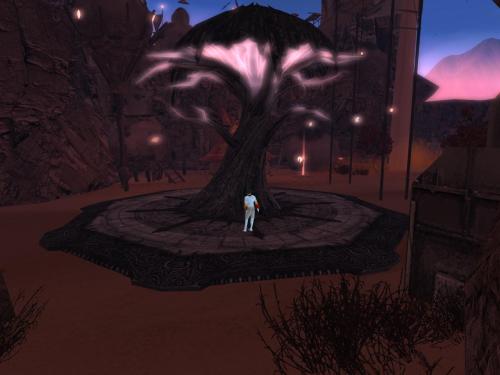 “Looks like Plan B,” she said to herself, understanding the meaning of The Flow. She didn’t try to intervene. “Story of my life,” she couldn’t help but add. 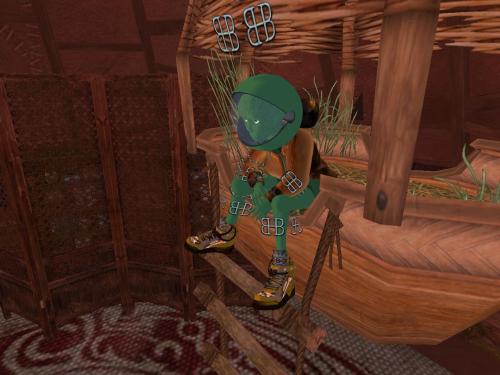 Baker takes in the sights while walking between the two sides of the compound.

Entering the open area of the north end, it was actually Mabel’s brother Little that Baker met first. He was performing his morning mediation in the middle of what they called the 40×40 when Baker approached. 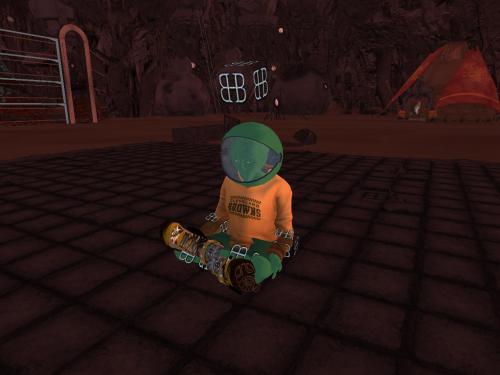 “Sir,” he called toward the little green man. “Sir, excuse me.” Little came up from the cosmic depths and skillfully untwined his legs, standing up. He turned toward Baker. “Ah, you must be Mr. Bloch, coming for his visit. I trust Mabel is doing well this fine morning. So have we chosen the path of A or B, hmmm?” Little was always a little too forthcoming, to the constant chagrin of his sister, but especially so when roused from meditation. He was in a twilight zone between one world and another.

Baker expressed confusion. “I… I haven’t seen Mabel. Are you her, um, husband?”

“Brother,” he returned. “Twin.” He was fully here now. “Name’s Little. We were born in this compound… the Dawg Pound. I don’t suppose you know anything about that as well.”

“No,” admitted Baker Bloch. “I don’t know anything about any of this. My… ship has broken down just outside the walls of your, um, area here. And I only briefly met your sister in INSCO to talk about a mysterious table and book. That was 3 days ago. Are you from INSCO as well? I thought Mabel lived there.” He didn’t tag the prefix “Old” to Mabel’s name since Little didn’t.

“I have said too much already,” Little proclaimed, pulling his orange hoodie more tightly around his body. “I must call my sister.” He walked toward the tent behind the 40×40 and, assuming a frog position, skillfully climbed to its top.

He bellows toward the south in an — to Baker — amazingly loud voice for such a small being. “MABEL, YOUR GUEST HAS ARRIVED!! HE’S OVER HERE WITH ME!! NOW!!” His voice echoed repeatedly throughout the surrounding hills.

“I understand!!” came Mabel’s echoing voice from the south.

That ended the “call”. On the way back to Mabel’s place, Little gave names to all the locations Baker had eyeballed on the walk over: Cleveland Rocks, Pit of Harrison, Booger Haze Pool. But it was just the beginning. Baker would remain stuck here for a number of days. The twins made sure of that.