Baker Bloch changed into Pitch Darkly and summoned Buster Damm to the scene. They couldn’t think of anywhere else to go, so they took her to a nearby church just on the other side of the woods. Tronesisia and Mary were supposedly still out of town. VHC City was not safe any longer. King Orange’s place was too close to the edge for comfort. No, it would have to be the church. The real Clare Nova’s church.

The next day, after a good night’s rest in a barrel bed located on the second floor, Wheeler felt a little better. “You called me Clare,” she said to Pitch Darkly, sitting in a nearby chair. Damm was out gathering firewood in the forest. “I distinctly remember your voice saying the name Clare in alarm. You thought I was dead.”

“Actually, at first I thought you were Mary. But, yeah, I did say Clare. I’m not sure why. I knew you were the person in the picture.”

Pitch uncrossed his legs. “Never mind that right now; I’ll show you later. First you must get better. That was a nasty collision you had with that tree.”

“That’s right. Nowhere near Christmas. I don’t know why you were there. Do you remember your name now?” Pitch looked at her keenly.

“Or is it Wilson Wheeler?”

“Very sad,” Pitch said to Buster later after they’d shared a meal of fruit and vegetables downstairs. “It’s as if she’s stuck between regular and reverse times.”

“She must have made successful contact with the shadow being.” Buster looks around the room. “Sure are a lot of bear images around here, Pitch. And more in the woods — real ones. There’s a cave if you haven’t noticed. Bear cave. Thing shocked me when I went inside and turned to the right. But she’s a right fine fellow. Name’s Abigail. But she’s mad as hell at the real Clare Nova. She’s hunted her kind. For example, look to your right.” 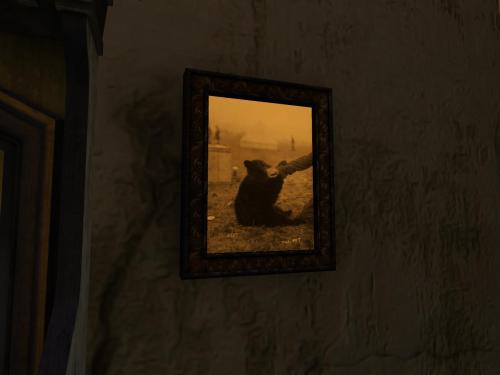 “Wheeler may not fully come out of it for a while,” said Buster, sighing.

“We may have to keep her here,” suggests Pitch. “Nowhere left to turn.”

“And danger all around.” Buster scans the room again.