Mr. Babyface had fallen asleep again studying the Big E on the top floor of his Collagesity apartment. Awoken by a large thud, he quickly turned over while remaining in his sprawled position and peered into the higher stories of the Kidd Tower — the same view he was looking at when he dozed off. 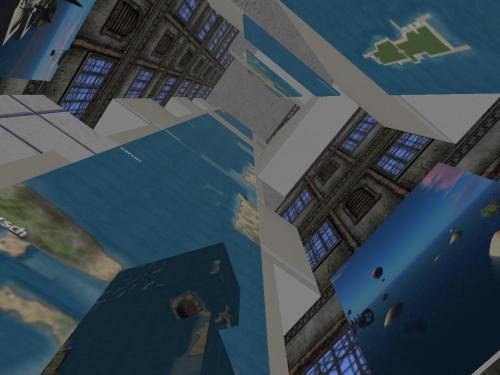 Everything as before, pheh, he thinks. Depictions of the Jeogeot Gulf sims representing the letters A-L on the east side and O-Z to the west remained intact. The missing M and N at the top: MaN. What it all spelled out, he realized, was another boring day in Collagesity for The Face (himself). But what about the thud?

Then in sitting up and turning around from the table, Mr. Babyface saw something totally unexpected. He jumped out of his chair. A familiar Middletown skyscraper loomed just beyond his window!

“Holy Jesus!” he exclaimed, toking rapidly on his still lit pipe. “The Kidd really did it this time. The tower is truly and fully *there*. But there is here!” And he knew this meant the The Kidd would in all likelihood be sitting in her beige chair on the floor below his apartment, in what use to be Greg Ogden’s spot. But maybe Greg has returned too. He better get down there posthaste.

200 feet above all this, Tronesisia heads to the top-of-the-line Italian refrigerator to retrieve another of those strong German beers (Brewmeister’s Quarterly).

But in glancing outside the window to her right, she saw the tower too! All the old, repressed memories came flooding back with the sight: Pitch and Buster’s killing shack across the tracks; Bendy heading to Muff-Bermingham in the Collagesity rocket Karoz built and her attempts to follow him; Mary’s pregnancy with George. And she’d been wasting all her time wallowing in the idiotic glories of war! Axis and Allies, phmph. There never was a war, she realized. She had been sleepwalking all along.

Fully awake now, she locates the red phone hidden behind the bed that would connect her directly with Baker Bloch. She remembered that piece of the puzzle too. “Call me when the transference happens,” he said while handing it to her over 2 months back. “You won’t remember me again until then. Nor I you. Good luck!”

The phone rings in Baker Bloch’s back pocket. “Excuse me, everyone,” he says, turning slightly red. He never seems to get calls any more and simply forgot to turn it off before The Table meeting. “I’ll just take this over to Perch…” 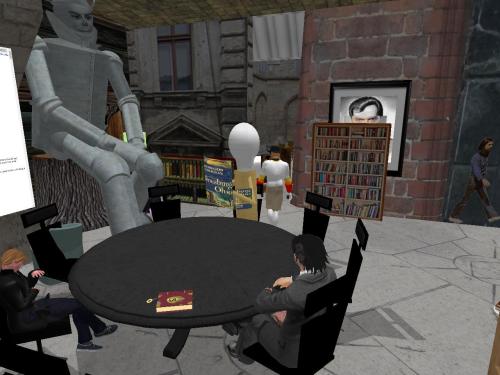 Tin S. Man smiles broadly as Baker walks past, and Wheeler catches it. “What are you up to giant?” she queries, scrutinizing him. “Besides the 20 foot mark, I mean. Why hasn’t Hucka Doobie shown up yet?”

In thinking how the sentence “Why hasn’t Hucka Doobie shown up yet?” translates to German, Wheeler then realizes who must be on the phone. 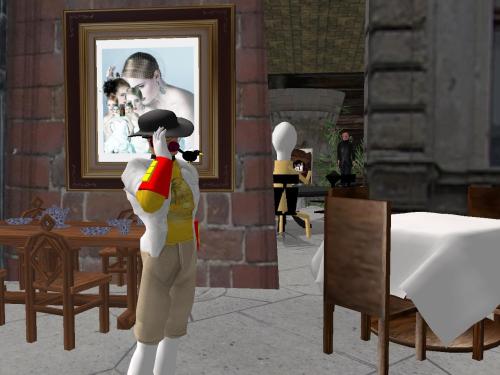