“Do you think you can manage to be happy today, Rabbit 02?”

“Rabbid… rabbid!” spoke the littlest, newist rabbit from his smaller seat at the table.”

“Aww, his first words! He turned rabbit into rabbid. How cute!”

“And so that shall be his name from here on,” decreed Rabbit 02. “Rabbid Rabbit.”

“Not Rabbit 03?” Rabbit 01 was puzzled. Rabbits always number their children.”

He looked toward the child, who was drooling on the upholstery. “We’ll talk about it later.” 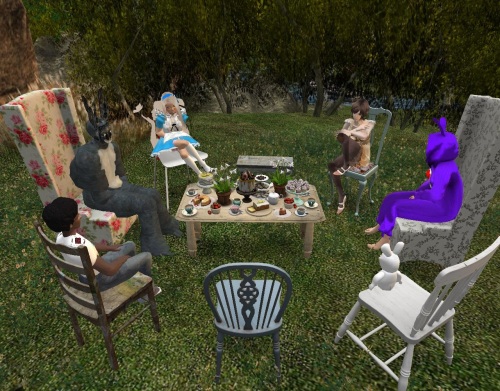 “I just want to repeat that it was so nice of you to come Alices. And your little boy — Francis isn’t it?”

“It’s Paris,” spoke Alice 02 bluntly. She was tired of all this name confusion. Rabbit 01 had prattled on for what seemed like hours. But it was only 20 minutes ago that the party started.”

“*12*.” Alice 02 almost shouted the number. They had gone over all their ages about 3 times now, to her counting. “I’m 15, she spoke plainly and levely, like you would to a child. “Alice 01 over there — in the *blue* dress, and with *blonde* hair — is 9. And our son is 12. We just divided the difference and… there he is.” Alice 02 effected a smile across the table at Paris, who brightly returned it. He was use to the temperamental nature of his mother and didn’t take it personally any longer, thanks to the counseling of 2nd mother Alice 01.

“1,” answered Rabbit 01 patiently, although she had answered the same question 2 times herself now. Not that she was counting. “1 day old.” She looked down and beamed at the tiny bunny beside her. “And he said his first words today! Didn’t you Rabbit 03?”

“Rabbit 03,” recited Alice 01, staring across the table at him sweetly, almost dreamily one could say. “What a cute name. I sometimes wished we’d numbered Paris.”

Alice 02 shot a stare toward Alice 01 with this, thinking: We *did* number Paris but you wanted a singular name. So we threw a dart at the world map and he became what he is. What kind of parents name their child after a French city? But Alice 01 said she had a niece who was so nice to her that use to name her children with that method. Moscow, Adelaide, and Brazilia they were called. Ridiculous. “If only the dart,” Alice 02 would say sometimes to Alice 01 — and she usually cried here a bit, then start again — “If only the dart would have hit Alice Springs, Australia all would be well in the world.”

Later in the day only the, er, grownups remained. Paris was playing with Rabbit 03/Rabbid down at the beach, making sure he didn’t wade into the water over his head. But he failed in his mission a couple of times. He obviously didn’t tell his mothers this.

Then lo and behold the table they were sitting at disappeared before their very eyes. All looked around at each other, all automatically standing now. Only a teapot remained.

“And his name is *Rabbid*” he snarled at them just out of earshot as they walked away.