Ragdoll was the first person to point out that if you stand atop the Stairs Gallery (still vacant as of this writing) and increase your draw distance to just over 300 meters, the almost totally white Max Statue will appear to the northeast. It then became sort of a fad to have impromptu parties there on Friday nights to celebrate the mysterious, 20 meter high deity perched atop the Second Lyfe Railroad in that direction. But Sister Martha Lamb quickly snuffed out any chance for the get-togethers to develop into yet another rival religion in town to her own. She declared it idol worshiping, and threatened to write the Lindens (rulers of our world) to have the statue torn down. The threat worked: either avatars moved over to Ragdoll’s old trailer park to continue worship (these numbered three: 30something couple Richard and Linda Abingdon, along with octogenarian Steve Barker), or people stayed in Collagesity and conveniently forgot all about it, including Ragdoll. After all, by this time she had a new boyfriend named Jerry Richardson to deal with, an older man himself and well into his 50s when they shared their first bowl of Bumpy’s ice cream purchased from the new Bodega Marketplace dessert bar. Yeah, Collagesity is doing just fine these days, and another religion may have muddied the spiritual waters too much. But Max remains there for all to see from Stairs, and — if you increase your draw distance to the, um, *max* (512 meters) — from about anywhere in town within eye shot actually. Long Live Max!

The eyes of Max. 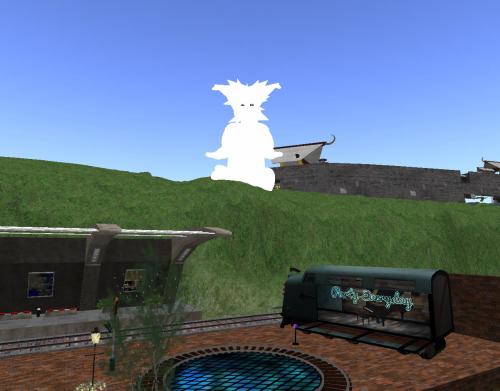 Max: Second Lyfe RR in front; Great Wall in back.