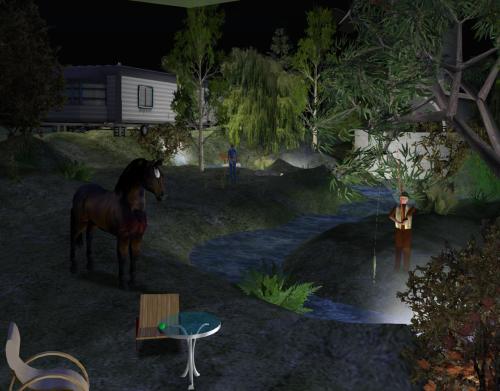 Mary usually talked to Ralph (horse) during her after-dark angling sessions at Rubisea, but tonight was different. Indigo, a night owl herself, made an introduction.

Indigo was full of questions about her new home. “Why do you call it the Rubi Sea?” the blue woman asked in her deep, almost masculine voice. And with odd overtones to it. 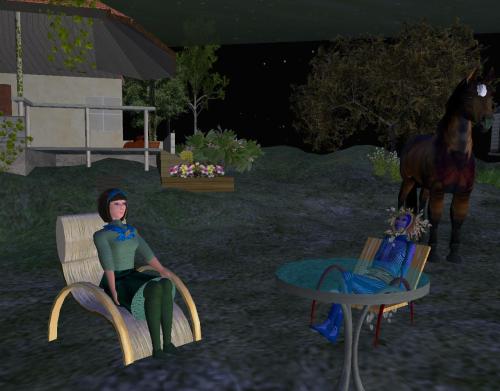 “Ru-BI-se-A,” Mary pronounced correctly. “It’s just a joke name. It’s a little pool of water but we call it a sea, see? And of course Rubi is the sim it’s in — we’re in. Well, *you’re* in. Say you just moved in night before last?” She looked over at the trailer sitting on the southwest corner of the lot, perched atop the spring that feeds the pool. She was eager to go take a closer look but Indigo seemed to want to keep her distance from it, maybe so as not to wake kinfolk Agnus and Ragdoll inside.

” Ru-BI-se-A,” Indigo repeated, and gazed over at the water to her left. “And this *perch*, you say, is the only fish in it. Like the Perch restaurant daddy and sis and I ate at yesterday with the big, human head mounted on the wall — another Perch. And then to add to it we had the perch at Perch.” She pointed left. “From this pool?”

Nah, these little fishes are hardly worth the bait to catch him. The restaurant’s fish are imported from the big fresh water lakes over in the Pond District, I believe. Tethia and Sesea. Maybe Pruni too.”

“Tethia and Sesea and Pruni.” Indigo found that saying names aloud helped her remember them. Or writing them down — but she forgot to bring her notepad and ink pen out tonight. She was going to start taking notes on the position of all the trees of the forest. Her daddy said that’s how she can help best right now in their efforts. Ragdoll will focus on religion, he’ll focus on The Diagonal as a whole, and Indigo will have the woods. She’s started to read Karl’s “Blood Curdling Tells of the Rubi Woods,” a Collagesity classic by now.

“But tell me more about yourself,” Mary then requested. “I know you’re from Obscure just over the hill — beyond The Wall. But were you born there?” Mary was guessing not, judging by her colorful appearance.

“Bennington.” Indigo almost spit the name out. “Don’t want to talk about it,” she added clippingly.

So Mary thought of other things for potential discussion. “How did you get involved in this — Pot-D wasn’t it?”

Indigo reflexively found herself biting her tongue again. She had slipped up near the beginning of their night time conversation, so glad she was to talk to another human being besides Angus and Ragdoll. So she decided to erase the faux pas from Mary’s mind. Indigo began toying with the triangular red amulet hanging round her neck, with glints from its silver skeletal hands catching Mary’s eye now and then. “Beautiful, isn’t it. My daddy gave this to me when I turned 13.” Indigo then reached around with both hands and removed the necklace, laying it on the table between them and making sure the triangle faced Mary full on. The fisherwoman was already transfixed by now. 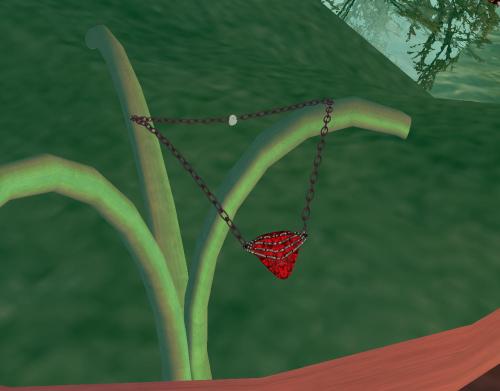 “Pot-D is a secret between you and me Mary. Collagesity will know in time what it means, but for right now you must keep it locked away in your mind. Locket. Locket. Lock-it.”

And just like that the deed was done. Indigo gathered up the necklace and said she had to get back to bed now since the sun was about to come up. Mary picked up her fishing pole and headed back to Darkly Manor, with the last thing she recalled about their conversation being Indigo’s hatred of her home town. Farmington, wasn’t it? Something “-ing”, anyway. Pretty sure.

“Goodbye, um…,” but Mary also couldn’t quite recall the name of the horse she had been friends with going on a year now.