Why did the graphic artist we hired — this Hazel or Mid Hazel or sumtin — turn Fisher Island into New Island, Jay Woodhull thinks later while enjoying his nightcap spliff and staring at Wednesday’s edition of the “New Island Gazette”. He looks at the inside curve of his left metal hand, spilling some pot ashes on the blurb below. “But they got the palms left, um, wrong — three instead of four, hmm.” The palms began to smolder, and Jay gathers enough sense to snuff them out with his other hand.

The Point of Barnaby Point

“The 3rd, Baker Bloch. Er, Pitch Darkly. Maybe you should just *turn into* Pitch Darkly since you seem to like the character so much. Right Mary?”

“It might be nice,” Mary said from behind them. She then hunches over further so she can see the Wisconsin map with the proximate New Island and Fisher Island better. “Do you think this will convince this Leeman or Leemon? There’s Sunset Beach in the lower right corner (after all).”

“His childhood home,” Bill finishes. “Well, it’s obvious something is going on in this and that other Wisconsin location at least.”

“Outagamie County,” Pitch Darkly adds. “Leeman there as well, mirroring the Leemon in Missouri. Only other one.”

“Right,” reinforces Bill. “You getting all this Mary?”

“I… think. Where’s the Wisconsin Leeman? Do we have a map of it as well?”

“Of course,” declares Bill, returning to the Oracle home page and looking up ‘Leemo’. Only 1 direct hit: Leemon Missouri, but with a lone variant of Leeman. Which leads us to the only other Leeman, in Wisconsin. She clicks the appropriate link and adjusts the map. 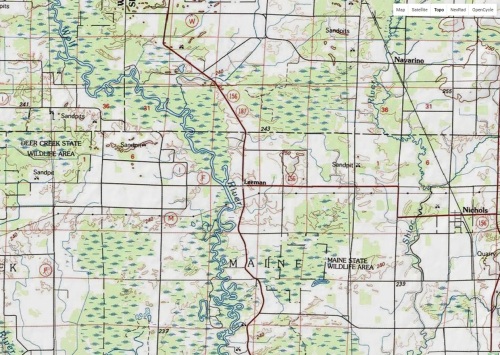 “Just a placemarker,” continues Bill. “But perhaps an effective one. Subtle but effective. It’s in his home county, you see. The new one.”

“Oh.” Mary scratches her head. “So Fisher Island is right next to New Island in Beaver Dam Lake, Wisconsin…”

“The two biggest islands of 22 in that lake,” Pitch tacks on. “And that’s the only New Island in America besides the one in the big swamp in Georgia. (Which) probably doesn’t count.”

“Correct, Mary,” replies Pitch, proud of his studious spouse. For he had married Mary on March 25th of this year in the Cult of Oo’d Church, the only place of worship in town at the time. One could say they were still in their newlywed phase. With all the attached highs and lows, of course. Tough dealing with New Life situations; but they were managing. Now that Pitch was out of the thick of his Russian phase. Still… the statue… “Art gallery laden Barnaby with its Barnaby Point in *his* New Island also being near the Sunset Beach of *his* New Island,” Pitch states. “Couple of miles apart.” 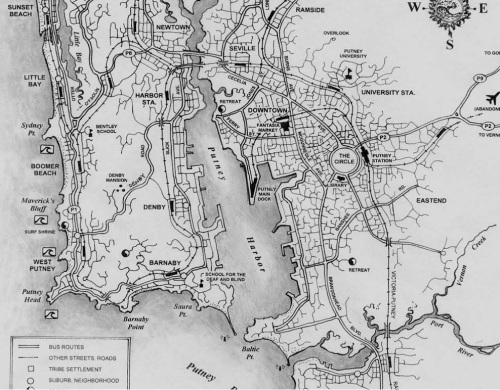 “They are no longer Sheriff and Pot Head in this blog,” corrects Bill. “They are Marty and Jay or Jay and Marty — take your pick. They are too stoned at any one point — get it? point — to care which of their names comes first, I would venture.” Bill was known for her bad puns, but at least she has a bit of a sense of humor now. Unlike olden times when she first came to power in Collagesity. She’s softened. “I’m tired,” she suddenly declares. “This meeting is over. Go back to your Darkly Manor and think of things to discuss in *our* next meeting. Which is tomorrow. And I expect *you two*” — she turns and points to the two 4 handed librarians sitting around The Table — “to contribute as well. And not just ‘carrot’… and ‘glasses.’ Something substantial and with meat that we can lay out on the table and feast upon. Beef or chicken. Or at least fish. Can you do that for me, hmm?”

The librarians stare at each other, knowing they can’t. 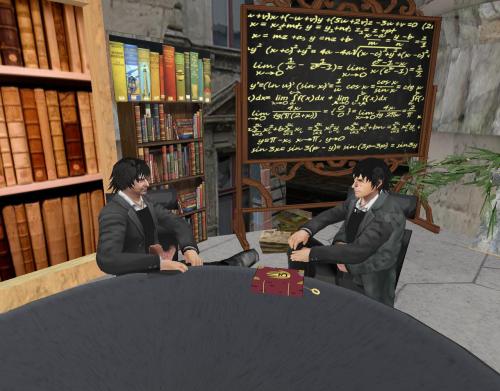 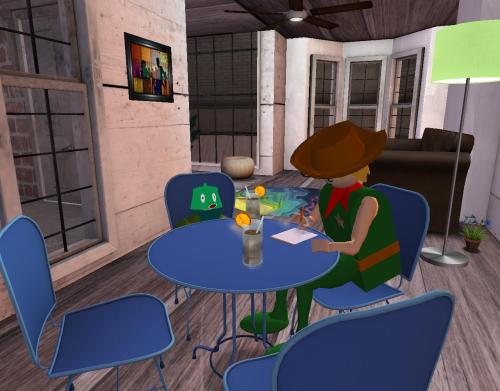 “What you writing there b-b-boss?” asks Marty Claflin, formerly known as Pot Head.

“Oh just some ideas about our business,” replies Jay Woodhull, formerly Sheriff. The Sheriff. But his law upholding days are over for now.

“Oh, I doubt it. She has to sing at the Cult of Oo’d in Collagesity tomorrow. She told me she’d most likely be staying over there tonight to save prep time in the morning.”

Jay puts down his pen and stares at Marty. “Why’d your studder come back? Hey, look over there… out the bay windows,” he says suddenly while pointing. “Someone’s coming.”

While Marty’s head was turned, Jay took the opportunity to knock the crap out of it with his metallic left hand. “OW!” he yelled, but with no studder. Jay’s quick remedy had worked.

“Thanks,” Marty managed after a moment of rubbing. “I think.”

“No problem, Marty.” He began writing on his notepad again. “Now about that business plan…”

Meanwhile in Mabel’s duplicate (and original) Scarlet Creative Sylvia House in Collagesity, she sits on her DaD Design knitted pouf freebie and stares out the front window into the woods, trying to spot Unch, an old game. It’s good to be home, she thinks while continuing to peer and squint. Too bad I can’t stay.