So Ragdoll showed her sister Indigo the bank in question. Over in Tiretta, not 1000 meters from their trailer, she explained. “You see, if a bank like this began at the bottom of a sim — 0/0, say — and extended in a diagonal to the top of the sim — 256/256 — the whole Diagonal within the sim would become the master number. The point becomes a line. That’s the despair part: no single, pointilistic master number. Instead: the bank; the line.”

“Slow down, slow down,” offers Indigo. “I’ve seen the pictures you’re referring to. 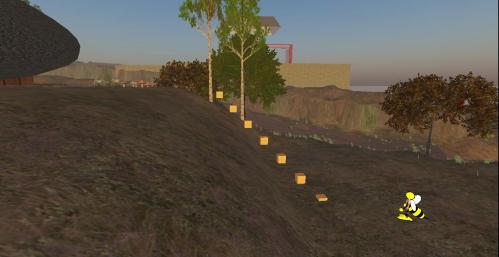 And how it seems to resonate in that set of collages over in — where was it?”

“Um, I can’t remember the name of the sim. But it’s very near the Kerchal Woods.”

“Which could have another, smaller diagonal attached to it — just as a sidenote. But, if this Greenup series is so important, why isn’t it in Collagesity presently? Why did we have to go all the way over to the Sansara continent?”

“Our joint users are working on that. I suppose you heard—”

“Yes,” answered Indigo, guessing what her sister was going to say. “The house on The Diagonal where they were creating the new New Island story has been derezzed. Another magic typewriter — poof.” Indigo threw up her hands as if releasing a puff of smoke.

“Just like with New Island and the Troll Cave there.” Ragdoll then pointed to the ground. “But this is what father showed me and added to it. The name of the property, Indigo: Drongallia. Which contains the word Diagonal, along with an extra ‘r’. The Gods can’t be *too* obvious with these things. Need to leave some mysteries.”

Indigo saw the name too in the ‘About Land’ description. “Yes.” She had quickly calculated the odds of this happening by chance. ‘Astronomical’ came the answer.

She sat down on a green mushroom in a cluster of 5. Ragdoll joined her.

“50/50 for me.” Ragdoll then admitted something to her sister. “I’m starting to get those urges, a bleed-through from the other side. My *new* self.”

“Right. Father warned me about that. Well…” Indigo deliberated where to begin with that talk, but decided now was not the time. Instead: just some encouragement. “Treat the flea itch first. Then you can work on that other itch.”