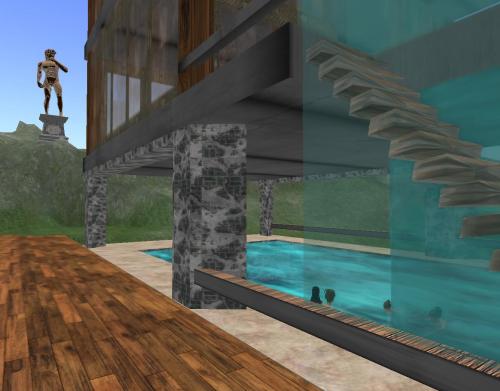 Ruby talks with members of the Redmoken Brabin Fan Club gathered at a pool below his looming effigy while waiting to meeting Indigo at the top of the mount. She learned some valuable information from ringleader Aidema Hill, a former Rik Blaisdale groupie, here perched before swimming, fellow Brabinites Ditsy and Zizzy Grant (twins). No big surprise for those familiar with the stuff on the mount: she’s surmised that Rik decided to come back as Red. Ruby suspected another Rhode project, but Indigo had her doubts.

“Aren’t you cold Ruby? I’m freezing on top of this mountain. At least my butt is warm now.”

“This very well could have been one of Timmy’s hideouts he mentioned, Indigo. He didn’t specify RB Mountain directly, but it’s got a great view of the lake he always went on about.”

Indigo looked to her right. “Indeed it does.”

“He said his house was on the east side.” Ruby checks her inworld map. “Let’s see, it seems we’re more on the west side. But now I remember it, he said his parents’ house was burned down in the war.”

“Maybe this clubhouse or hideout or whatever it is wasn’t even built until after the war and Timmy left.”

“No,” counters Ruby to Indigo. “I feel his presence here.” She moves to the other side of the floor. “Look at this map — the Big Nope. I may have remembered him talking about such a place. Something about a well and a refusal. Proposal turned down: Big Nope.”

“Alright. I need to warm my front anyways — back getting toasty. That must have been a heated pool those girls were swimming in.”

“Or MAYBE, this map is the mountain itself. Big Nope on one side, and over here, the Safe Zone. Could be death and life itself. Rik reborn as Red, as Aidema Hill speculated. ‘X’ and ‘O’. Crossed out and then revived. Like as from an egg — womb over tomb. And in the MIDDLE: this hideout. Right on the apex of the mountain. Between death and rebirth. The Big Between.”

“Next thing you’ll be telling me, Young Ruby, is that Timmy himself planned all this to indicate his resurrection.” Ruby stared at her steadily. “Oh. That *is* what you’re telling me.”

But what as? both wondered.