He sat on the throne a long time after he finished. He didn’t want to go back down. April Mae was pissed because *he* was pissed, one of those vicious cycles. But what did he really have besides the narrow boat-plane? She had her clothes, her friends, her furniture, her… paintings. Were they really her paintings? No, they had bought them together. The paintings were his as well. Kind of. Split, I suppose.

But… the scratch. Nay, more than a scratch, a scar. Car scar. She said she just ran into the dune — didn’t see it looming up in front of her when overshooting the cemetery. And why does she have to go out there to the Omega continent to visit her ex so often? She’s got *me* now. I’m the important, *living* one. She has to help protect *me*.

Instead of going downstairs to continue arguing with his wife, Monsieur Gold decides to walk over to his study on the other side of the second floor to check his email account. Eventually, inevitably, he’s draw again to play that game on the laptop he’s so addicted to. We’ve seen it before: Gunn Mobile Home Trailer Park. He plays for about an hour until he’s pretty certain April Mae has simmered down. On his way to the stairs, he pauses to contemplate Monet’s “Woman with a Parasol” at the end of the hallway, one of two versions displayed in the mansion. One for him, one for his wife. Split. 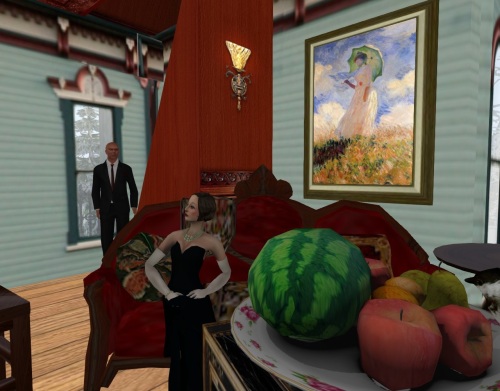 “Oh. Hello dear. Sorry about before.”