“Oops! Holding hands again. You have to watch that.” 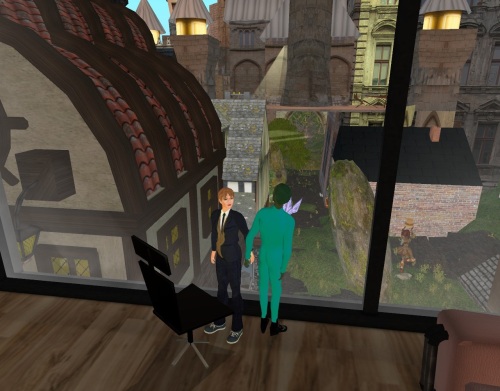 “So how do you like it? Great view down Old Cannon Road into the woods. You can probably watch Baker Blinker’s comings and goings. Make sure she’s not cheating on you, hehe.”

“Why — can’t you and Baker Blinker just live together. What’s this thing about the 2 separate places?”

“I really don’t,” spoke Wheeler. “You had your one shining moment together. You should be happy now. Don’t mantis’ just make love once a year anyways? Aren’t you part mantis?” she teased again.

“I know who Space Ghost is.”

“Where *is* Space Ghost? Oh, I guess I should be asking Baker Bloch that question. But *your* father. What’s all this b.s. about being Gene Fade’s son? Gene Fade doesn’t exist. Does he?” Wheeler was becoming curious again; doubts about his nonexistence creeping in once more. Karoz *was* here. He *could* be part moss. Probably more likely than being part mantis. And his mother — she must get more of the story about his mother. Both of ’em.