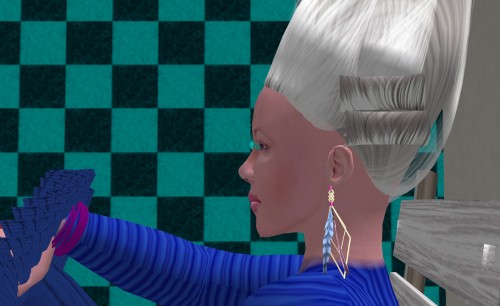 ‘”I come here as a representative of the great, honorable Blue Feather Douglas, Marcus Fox Smartville. Who do you represent?”

“Also the forces of good and evil,” Marcus shot back smartly. “Your Mama in my case.”

“*Your* Mama. Good enough I suppose. Anyway, let’s hash out a deal. And I don’t mean drugs.”

“I should apologize for my protege Eighty-eight not showing up. The astrologer gave her some bad news. Turns out — get this — the stars say she’s an *Aquarius*”.

“The dreaded sign which seems to be water but is actually air. The most misunderstood of them all. I think the stress opened her up to that flu everyone ’round here seems to be coming down with.”

“You feel okay? Did the breakfast help any? Sometimes when I eat…”

“I didn’t eat,” she protested. “I *nibbled*. The only, real way to a really long life is nibbling. Full stomach foods will get you killed by the age of 88. Unless you’re mowed down by a gun earlier on. Like those people in Gunn City, Missouri, US of A. Now I like a vigilante as much as the next duchess or duke, but I prefer corrections through verbal acerbity rather than, well, steel on bone.”

“I agree. Wholeheartedly. Pen over sword — that kind of thing.”

“The tongue is mightier than the quill,” Tracy Austin (Wheeler Wilson) fleshed out. “Nothing like a good tongue lashing (for corrections). You should know all about that.”

Marcus Fox Smartville sticks out his tongue here, revealing the diamond inlaid steel ring piercing it. “Sthiny,” he says while his tongue is still projecting, also pointing to the object. Not so smart now. Something is actually quite wrong with the male in the current post. He had a breakdown in his early twenties and some say his mind hasn’t quite recovered, and that he’s actually more sucker than smart. Like Sucklands sucker, reading patterns (synchronicity) where they don’t exist (randomness). Your Mama thinks this. And, behind her, Grey Scale Kimball, who they needed to talk about next.

“Why didn’t you say you represented Grey Scale Kimball instead?” asked Tracy Austin on cue, indicating the house around them. Grey’s House.

I can answer that. Because Kensington’s Turtle Hill, aka The Green Turtle, had been skipped over. Negotiations concerning the War of Aggressions have moved to Cassandra City in the Deep South, where correct history will always place them. Corrections again… tongue lashing. Your Mama gave Marcus Fox Smartville an earful on that hill. He wonders when the smarting will stop. Not here for certain. Not in this Deep South residence.

Where am I? Oh, I teleported to the center of the wrong SIF. One of two instead of two of two. But what’s that ahead of me? A light. Could this be another possible clue uncovered by pure synchronicity once more? I moved forward… 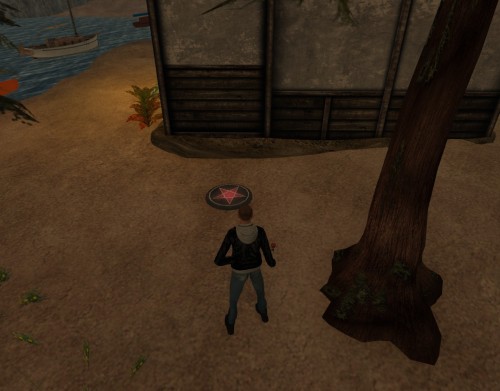 … and eventually came here to the edge of a rather large if redundant pine forest illuminated by the dawn’s early light. “Horns,” I speak aloud, looking at the teleporter design in front of me. “The devil inside: this must be another stepping stone.” I decided to call in Wheeler Wilson since I’d already talked to Bracket.

“Why are we here, Baker Bloch?” she asked after teleporting in.

Baker Bloch? I think. I’m… then I realized she’s right. I remembered who I was. Then I told her why she was here.

“Well, she began again after shaking her head a bit. “I wouldn’t call us exactly *friends*” She then called me a thing I cannot write here for reading. She had me (in a pickle). She then took off one of her shoes and made a phone call on it, something I understandably wasn’t expecting, even though I am *Smart*. The person on the other end? Someone named Eighty-eight. She prefaced the call (and the pulling off of the shoe) by stating she was phoning up her *own* friend.

“Eighty-eight?” she asked the person on the phone, whom I soon realized had that name. “Where are you?” Buzzing on the line. “I have Baker Bloch here. He’s trying to reach The End again.” More buzzing. “14th, I think.” Buzzing. “I know. We weren’t expecting it this soon either. He’s just going around trying to phone up friends, kind of like what I’m doing to you. Perhaps it’s catching.” She smiles at me with this. A sweet smile, surprising me. Hmm. “Meet us in Cassandra City,” she closed. “At the Grey’s House.” Hmm, again.

Eighty-eight soon phoned back (shoe again pulled off; answered), and told Wheeler that she just realized she had an appointment with an astrologer this evening and that they’d have to postpone a trip to Cassandra City for another night. So with that I took my leave of Wheeler and teleported over into the 2nd (and final) SIF sim, the one where Sweet Alice’s aunt has dealings with. I knew who this was now. Your Mama.

Maybe I should put down the flower.

“Always looking for love, aren’t you Marcus Fox Smartville. I have an aunt down in SIFton. I’ve heard the rumors.”

“Well, ahh,” I attempted to explain. “You know. Things happen. I sometimes get a little carried away.”

“And you’ve still got that primmy rose with you. Primrose… primmy rose. That’s where it all started for you, right?”

Ah ha. A clue! I thought. Thanks Sweet Alice! Now I just had to finish out this awkward meeting. She stared steadily at me. A member of the church choir she was, and also the prayer group meeting immediately afterwards. Was this…?

“No,” she answered, as if reading my mind, shocking me. But then I remembered we were already talking about the Room before the rose diversion. She was just answering a question I’d already asked about 2 minutes ago. Might as well be 20 years ago. Then she did it again.

“20 years. *Not* 12 as some think. Give me credit for aging well! It was a long time ago now. I’ll give you this before we — both of us — move on. The retaliatory strike was at Golden City, in case you didn’t know.”

“Golden City to Golden Sink. The Truth Brothers wiped out.”

Ahh. The Truths! Both of ’em. Such horrible luck. First the house with the fire, then the house they were replacing it with by an even greater fire. Nuclear. Was this what Biff Carter meant by the second gun?

“No,” she answered. She’d done it again. Time to move on.

“So the A.Team’s rocket was never launched. Chip Shot, Pipersville in the future, was saved.”

“Oh the bomb reached Chip Shot. Wiped it pretty clean out. But it’s like that church choir practice synchronicity from Beatrice, Nebraska, US of A. Pretty much everyone was out of town at the time. Sink X is there for a reason. It’s a residue crater for certain — not a legitimate, Sinkology verified sinkhole. The Brown-Bower theorems prove that conclusively. So that part can’t be changed. But we got almost everyone out. Save one.”

“The Gno King,” I guessed after a beat.

“No,” replied Detective Biff Carter, still on the hunt. “He or she survived in the Room. It was on the north side of Chip Shot but the south side of Pipersville. When the former rebuilt as the latter after the War of Southern Aggression.”

“So the Gno King hid out in the room and survived the blast.”

“No… not the Gno King. Get that trail out of your noggin. It was someone else. We know he (or she) was there because of the maths, though. They couldn’t work out the way they did if not.”

“Your Mama. Your Mama was in the Room.”

“It’s on the north side of Chip Shot,” and here patient, precise Detective Carter moved his right hand away from me on the bar counter, and pivoted it sideways, as in a karate chop, “and the south side of Pipersville — when it came about.” He opened his near hand with the same gesture but facing the opposite direction. “Where’s the other gun, Marcus? What’s neither North (he moved his far hand back toward me) nor South (he moved his near hand away from me until they met in the middle to make a fused statement)?”