“Okay, I’m here gang. What do you want?” As if I didn’t know, he said to himself, looking around at the dumb expression on each and every one of their faces. How did we come from the same gene pool?

“We want you to *pick up the gunn*,” Cousin Lester commanded opposite him, “and shoot that woman over there.” He indicates the “woman”. “*She’s got a gunn, you’ve got a gunn. Whatcha gonna do?”

“Yeah, hehe, whatcha gonna do Bullfrog, hoho,” injected even simpler Cousin Kermit Winkler sitting beside Cousin Lester. He moves toward the table, picks up the gunn, and studies. “She’s a beauty, eh, huhu?” he says while turning it over several times in his hands, and then offers it to Bullfrog, who just stares at him in hatred until Kermit Winkler sets it back on the table between them and returns to his sofa beside Lester in deadly silence.

“Just Make American Great Again for God’s sake!” he couldn’t help add while scratching his side. 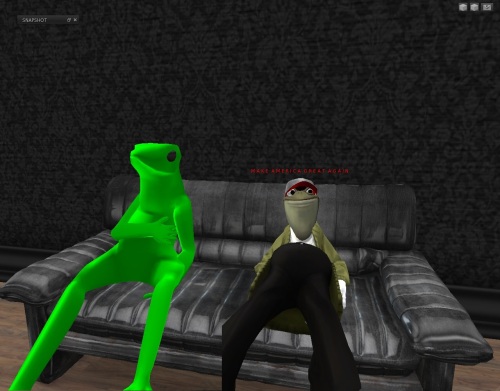 Bullfrog turns to Uncle Melville “Peepee” Todd beside him, who he considers the smartest of the bunch, which isn’t saying much. 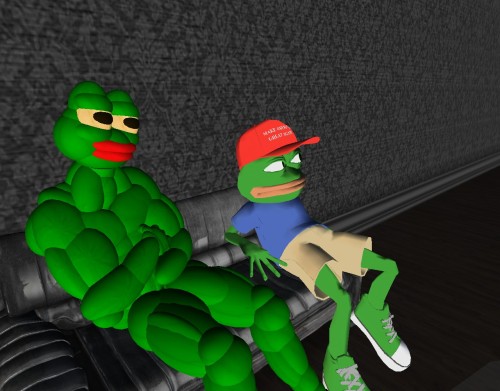 “Just do it,” he said simply to his nephew. “Shoot the gunn at the woman with the gunn and get it over with. Maybe more of *us* will come of it,” meaning more might be added to this Red Squirt Seven bunch.

Bullfrog didn’t need to think any more. He picked up the gunn and opened fire.