Feng Sui and Qi stare at the door waiting for customers that never come. “Damn that Fish Head,” sitting Qi exclaims at one point. “Damn the Head and the Fish,” reinforces her standing sister at the time, then later thinks, while still standing and staring over: maybe we should fix the bullet holes in the door. Maybe that doesn’t help with the customers. The Store Zero slaughters were a long time ago, after all. Maybe it’s time to finally heal the wounds. “We can’t have a repeat of the past, sister of mine,” she speaks down to Qi after telling her the same. “Oh *no*,” Qi doubles down. They both know, no matter what’s going on with Fish Head and the Bird above them, that they cannot return to the ugly, brutal past. The Dark Days.

Later: back at their nearby apartment…

… Qi dwells on the dark past…

… while Feng Sui discusses what to fix for supper with Uncle Jack. 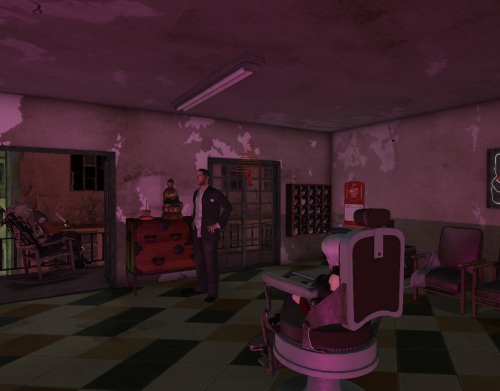 Jack: “You’ll have to ask Uncle *John* about that,” indicating the man sitting in the rocking chair on the balcony. John Lockfry 01. Been a long time.