Kate McCoy tries to find the unicorn where she saw it in the bushes.

A sudden call from the house in that scary, shrill voice, so familiar. “Katy! Katy Kidd! Come help your mother get out of bed and take her shower!”

“Do you see it out there Pitch? Come here please.” Kate McCoy, moved on from her late husband Jack and the Hilling sim as a whole, waved Baker/Pitch over to see if he could eyeball the unicorn as well. He stopped playing the piano and singing track 3 of the Platinum Prune suite of songs, popular in Bena and the surroundings these days.

“Nothing,” he said after moving to the window to also stare out at the yard. “Trick of the leaves,” he suggested correctly. But Kate knew it was more. Back to business.

“I’ve decided I’m going to play my mother here in Bena. The Mother of Vampires, kind of like the Mother of Dragons but also different. Which wasn’t real either — cats instead,” Kate McCoy tried to explain about her new role.”

“Um hum,” Pitch Darkly exclaimed from the couch. “And what of Garfield, um, *Hatfield*? Will he remain, say, in the attic of the house? He’s a big orange (cartoon) cat, after all. Nothing that a village full of vampires would have.”

“I suppose he’ll have to,” opined Kate McCoy, finger to lip in thinking mode. “And yourself? Did Rebl set you up with your own coffin? Have you interacted with anyone in the community proper yet?”

“Just Barry,” Pitch responded about the used coffin salesman he dealt with online, who just so happens to be from Bena and is giving up his own vampire gig here. So Pitch is, in essence, replacing Barry. Interesting.

“Lindens,” Kate then utters, and shakes her head. “Taking away the few good men — vampires — we have. Leaving us with only Lemons.”

Pitch became confused. “But — Lemons are good. Aren’t they?” Kate McCoy just glared at him.

Looks like Pitch Darkly is all ready to move in to his newly relocated house in Bena. Just hasn’t done it yet.

I’m picking up on: Barry. Barry is missing?

Better start in the graveyard. If I can just get over this — chasm.

Easy peasy! Now… who will I turn into tonight originally? Barry?

Ah, let’s just go with Pitch. He begins poking around while the transformation continues from Baker… 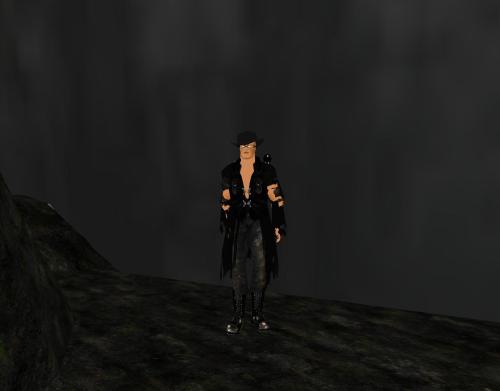 *This* is what I’m missing. A coffin! Vampires must have coffins to hide out for the night. And something about native soil. He should study all this more, him being a vampire and all. How does he exist and breath and live? What does he eat and drink? What kind of crowd does he mingle with? Other vampires? Not likely — at this stage. Too naive; would be called out (!).

So much more to learn about vampiring. Is that even a word (for instance)?

It’s not a bad fit. If I only had something to read late at night, to kill the time or just help me get to sleep. Wait — I don’t *need* sleep. Not at night. It’s during the day — yes, I remember. I’m suppose to hunt at night. For food, for blood. This is a daytime hangout. I’ll have to switch all my hours around to get by in this place(!). This Bena. Still — it’s night now. I can still go over to the public library and see what books they have. Okay, if this town is full of vampires, would businesses be open at night instead of the day? Would the public library be open? Maybe, even if not, I could just pass through the door, being a vampire and all.

He smartly decides to ring up Bena lawyer wannabe Rebl to ask how to proceed with the assimilation into the community. Good idea. The first thing she recommended upon hearing Pitch’s explorations so far was: *don’t* use other vampires’ coffins. Get your own!

So he went online to the SL Marketplace and picked up a cheap used one from some dude named Barry.