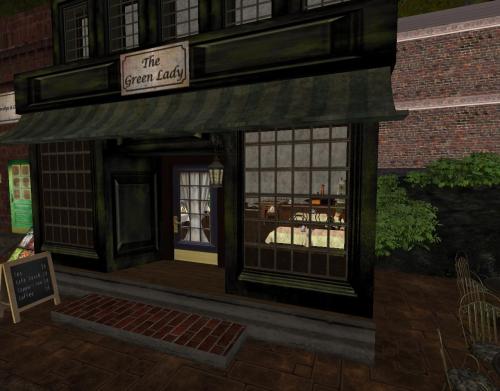 If and when she came into town, she liked to sip coffee at The Green Lady next to the park and stare out at the bay. At night, Ben’s place was too full of vampires, and during the day there was still the threat of one or two of his old werewolf friends stopping by and reminiscing about the old days. She didn’t want to hear such talk. *Both* eras are equally bad in her mind, she’d always want to pitch to them, both Bennington and, now, Bena. This town is *cursed*!  she sometimes wanted to scream from the top of Bena Hill toward the buildings and roads spanning north to east before her, Mothers Place behind be damned. Here at the Green Lady, drinking her cinnamon spiced coffee, she could feel away from it all for a moment.  It was like the place was made for her, Green Lady matching green (clad) lady. It was here she could think about her *own* past, and figured out what went right but also, yes, what went wrong according to her master plan formulated at age 17, her first year in college taking astromystics classes at Teepot Tech. She would acquire a husband in due time but not be chained to his lifestyle. Well, she missed the boat there(!). Although she loves Ben dearly, no one can deny his faults, primarily the threat of turning into a wolf during any full moon despite the continued treatments down through the years. “I can change,” he declares every now and then. “I *will* change”. “I have found The Lord now,” he also might tack on to any such proclamation. But wanderlust sometimes gets a hold of him and he’s gone for days, part of his wolf heritage surfacing. “Where were you now?” she’d ask, and he’d just go on talking about how The Lord told him to do this, and go there and do that. Always the same excuse. Sometimes she’d like to just yank this Lord dude out of the clouds and give him an earful back.

They managed, but it wasn’t what you’d call a perfect relationship. On the sly, sometimes Phyllis Phox would inquire to her lawyer friend in town — Rebl of course — about how divorcing a werewolf might fare. “Poorly,” she would emphasize. The pack always takes care of itself. Ben, of course, wouldn’t lift  a finger — *probably* — but the others…

If only ditzy classmate Marsha wouldn’t have introduced me to him at that Benjamin Harrison Ball held at Grover Cleveland Hall down Former Presidents Lane. If only one or the other would have chosen a different college.