a river runs through it

The artist whose name sounds like Rothko sits opposite Andy Warhole, one a-hole of a guy.

“The soothsayer will be here soon and we’ll *see*… 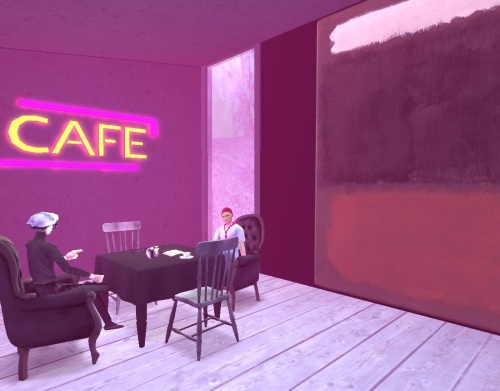 who’s the better artist in hyperspace and hypertime.”

“Just hypertime will do. I don’t do hyperspace.”  His voice was level and confident, like he was the more famous artist already instead of a basic unknown. Andy was threatened. He’d been to Gabby several times since we last saw him over in Cassandra City (Moe’s –now sold!). The picture was clearing in his smoky ball. Andy was not the most famous artist of the land! Gabby then explained this was in hypertime — Gabby worked mostly in hyper worlds to see his visions, he said — and thus there’s *time* to change the outcome. Gabby didn’t illuminate the idea of complementary hyperspace to the rather dim witted Warhole; probably knew it would be a waste of his breath. Hypertime was enough for today. The stage had been set. And here he was, murderous covid ravens circling above and outside this tiny cafe perched on the top of Yellowmoon or thereabouts. With the artist whose name sounded like Rothko but wasn’t Rothko. Close! Close enough for Andy. Because Andy indeed thought he was this artist. He had trouble resolving near from same in his fuzzy way of thinking, and Barry was just playing along with the confusion. So this would be another Post involving Close.

Thoko: that’s it. Maker of fine designer women’s clothing. But that would become a front for something much more deep and sinister, like the Amazon itself. It was like going from Nowhere to Somewhere…