Peet Archer considered requesting, “Peet please,” again, but decided against it. Toddles had somehow shrunk down to her “normal” diminutive size during the trip into the heart of this fine Canadian hamlet, warm on an early spring day. “Who have we lost this time?”

“Lennon, it appears. Must be the same, yes, as Lemon. The lemon tree went missing from Springfeld, Mr. Archer. Shelbyvale stole.” Toddles needed to rest her wee mouth again. She put her thoughts into Archer’s brain, as she did sometimes when this happened.

“So *what* is the equivalent to Shelbyvale for our Picturetown here?” he said. They both peered down the alley with Mary York at the increasingly diminutive skateboarder, almost out of sight now. Might as well say he’s gone. There: he’s gone.

“All blocked up, Mr. Archer. Someone has sealed off the passage to the interior, ‘X’ed it out in effect.”

“We didn’t come soon enough,” he said for her. “We better check the 102 alley for changes as well.” 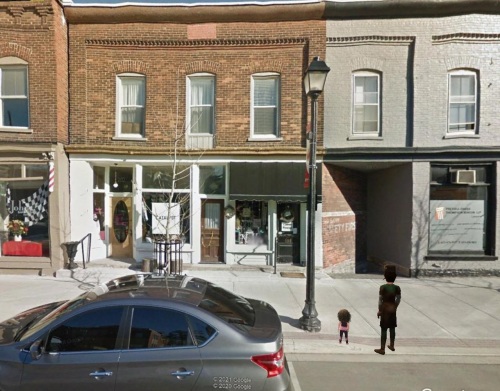