Lisa the Vegetarian’s boathouse was still anchored off the west coast of New Island, but she had failed to find her brother, just like Wendy (one of ’em, perhaps the right one?) did before her. She’d heard of Picturetown by now and 102. She knew that the number stood for a game of roshambo, otherwise known as rock paper scissors, like the first 3 chapters of the red book and something to truly contemplate why this is so. Biff Carter might know. After all, he’s in it, but not the first 3. Instead the 4th, where triangle turns to square. He is just as dirty (in the book) as the doctor, the main character of the 4th. Instead of a private dick, he is a restaurant owner, perhaps of the Red Dress Diner if we mix up and combine realities again. But Biff Carter has been revealed — there — by his wife of all people, to be the same as Axis and may not reappear in this here photo-novel (24 in a series of 20; getting close to the end!), his story seemingly resolved but we’ll see. Maybe he leaves his cherished red book in a special place (Red Dress Diner again?) for someone else to find, perhaps Barry De Boy, or maybe one of the Wendys who seem destined to be a mate to him, like Biff-as-Axis has been paired off with… Wendy? Wheeler? We need to combine more characters, it seems. Have them play the triune game as well to whittle downward.

Axis is not Barry De Boy. I do have that much.

I wonder what chapter she’s on? 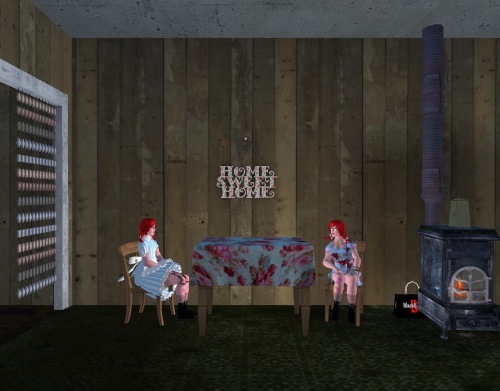 “One of us will have to go, twin of mine. And *you* are the one sitting sideways. I think it’s you.”

The Wendy who was sitting sideways to the observing camera spoke. “Don’t cross me. You can’t cross me.”

“Before the user Our God realized the mistake. Another mighty cock-up!”

“… is our Lord,” non-sideways sitting Wendy tacked on. But they both were in different ways. “Paper?” one uttered.

“Scissors,” answered the other. She was the one.

On the sealed evergreen island in the middle of snow snow snow, Barry De Boy waited.

And then nodded off.