I returned to the island of Meaux — seen here in the distance behind a quite familiar fluttering owl flag — for more potential links and clues about where to head next. This newest owl sighting seemed to dictate the action. 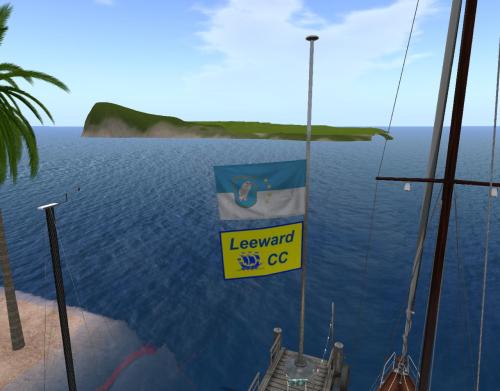 I fairly quickly ended up on Half Hitch, an island just beyond the south*east* corner of Nautilus, certainly my mainland continent of focus now that Collagesity has returned to it. So I’ve visited Castle Valeria in Nautilus’ northwest corner directly opposite here on the continent seemingly based on a 31×31 square, and then Valgate and also the overall Viterbo environs kind of tucked in its northeast corner. Now: southeast. I appear to be perhaps circling the square, a variation on the old alchemical paradox of squaring the circle. Circle near historical Valgate, Montana is also a hint here, to add onto, of course, the close proximity of Valeria and (Green)castle in Jasper County, IA., a square based county after all, just like its twin in IL where all the names of my collage series down through the years comes from. Up until the newest: Picturetown. Something is different now; shifted.

Was that a shouting (or singing?) man etched in the bow of this wrecked ship? What would be the utterance if so? Was this an angry or joyous person?

*Anyhoot* (Jeffrey Phillips likes to toss that word around a lot these days to segue between trains of thought), back to Half Hitch. Climbing the highest hill there to take a look around. Climbing, climbing… 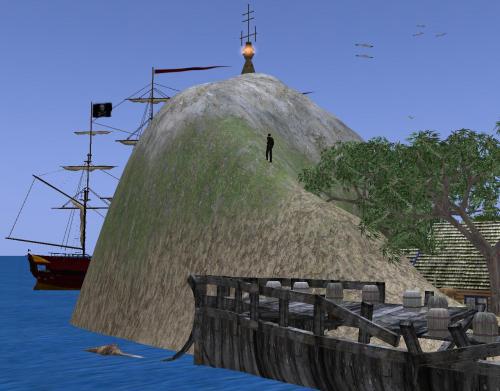 From the vantage point at the top, Jeffrey Phillips takes in the sight of Captain Crazy’s noisy, dirty trawler pulling into the small harbor of the town. Here was a man who might know something. So it’s back down off the hill for Jeffrey and into the tavern where he sees him and his men — well, man — head into. Cpt. Crazy use to have 8 men working on his ship but now he’s down to 1 thanks to the Child Labor Board cracking down on him last Fall. The only one over 18, heck the only one over 12. Here was a man who not only bent the rules, but turned them into salty pretzels to consume after any drinking jag. He was crazy, yes. But he still was probably the sanest man to visit Half Hitch today, what with that loonie convention going on over at neighboring Nautilus Island (yes, there is an island named Nautilus in addition to a continent, although the island and continent are next to each other and Nautilus Island is sometimes included as a part of the Nautilus continent, logically enough; but it causes some confusion, even to long time Our Second Lyfe residents).

Let’s not worry about those Nautilus loonies nor go into any details on why they’re even crazier than Crazy. Half Hitch is definitely not a part of any Nautilus, although it lies, like I said, just beyond the southeast corner of the continent, and also just beyond the western edge of the island. It’s similar to Castle Valeria just past the northeast corner in this way, since that sim wasn’t part of the original Nautilus either — it’s an add on. Let’s just move into a dialog with Crazy to dig up more information…

Jeffrey Phillips was going to interject himself but the two mates, captain and one man crew, seemed to be having some kind of romantic dinner going on, what with the red coral heart between them and the, well, occasional mouth kissing and all the accompanying holding of hands across the table inside this heart. Jeffrey was, of course, okay with the Captain and his mate being gay. His half sister on his mother father’s side was half so and they got along better than any of his other percentage siblings. Viewpoints matter. Jeffrey would bide his time, having nothing else pressing on his calendar at the moment. Crime was down in Collagesity thanks to the new-ish police department. 5 fingerprince had been lifted from the more serious crime scenes, and Jeffrey had them all under control. Now was the time to synchronize the continent to his city to ensure more stability, and circling its square seemed to be the key.