“Did you know I have a hole in my back, Jeffrey? Do you even notice these things?” 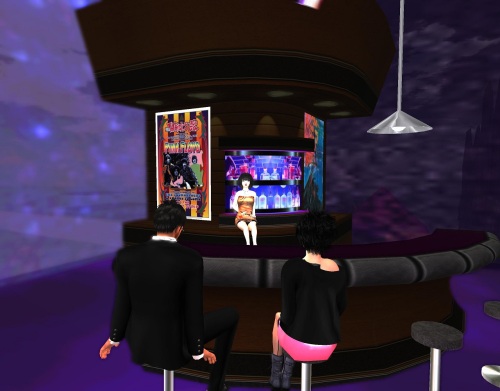 Pause. “Anyway, I guess coming here gave me an excuse to wear that hot pink dress I haven’t worn since, oh well, I suppose since I walked under that marquee in Picturetown and then glanced down the alley at skateboarding Bart Smipson. The bastard.”

“Now now, Charlene. He’s just a kid, a ragamuffin of the streets.” Smaller pause. “Plus, he’s probably dead. We’ll find out soon. Because of the next place we have to visit. Fern’s already been there. Which means you will be there. Eventually.”

“Pheh.” Charlene the Punk reached behind her shoulder and felt the hole in her back, suddenly becoming self conscious of it. She then drew her attention forward again. “And who’s this suppose to be? Me in the past I suppose — presume.”

“That’s the idea. Felicia Mae Appletree, but not the Smipsons teacher, the one who would have taught Bart most likely.”

“Instead, the child, the daughter. Maebaleia tattoo already on her back — she’s too young for that.”

“I have a tattoo of a *hole* on my back,” Charlene complained. “I don’t want to hear about some itty bitty upper back tattoo.”

“Central back.” He had walked behind the bar and checked. That’s how he knew where they needed to head next. Fern must have planted the idea in the young Charlene’s head. If this is Charlene, and it appears it is so.

“Does she *talk*?” Charlene the Punk says exasperatedly, about ready to leave if some kind of music doesn’t start soon. And no Residents this time or she’s outta here real real quick. She’s already told Jeffrey that, who assured her that’s it’s only Pink Floyd music offered here. She checks to see where his hands and fingers are, though, and notices that some remain hidden either in darkness or in clothes. She will not be entertained by the mastications of Homer; she was never one of those kids.

Boxes of donuts were rolled out on the stage. Charlene the Punk was outta here quicker than a pig with wings. 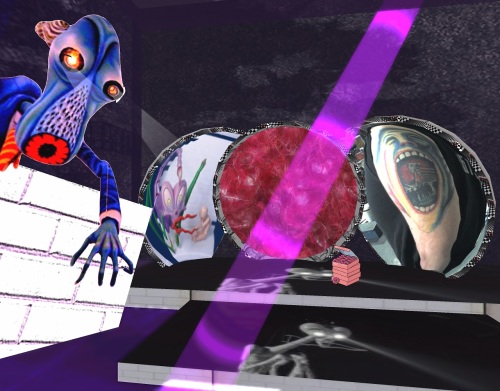 “Have a seat, er, Felicia,” offered Jeffrey after the exit. 10 years younger, underaged even for him. Probably all for the best. 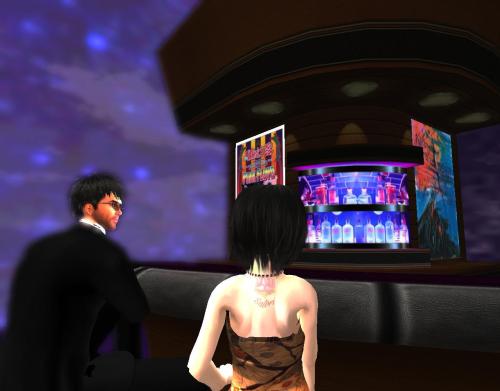 “Tell me about the tattoo; I dig it,” Jeffrey requests after the entertainment starts. Turns out she was one of those kids after all. She’d just forgotten what she had dug.

He was going even further back now, almost to the beginning, the origin of Our Second Lyfe itself. What was the point of it all?

It was logical that Roger Pine Ridge would show up at this juncture in our still evolving storyline, taking even more rusty twists and turns to and fro across the Nautilus continent and beyond. We’re on Yd Island currently, the Ratzenburger Rabbit just beyond that castle over there. Jeffrey Phillips felt warm again; he knew he was close. Roger helped. 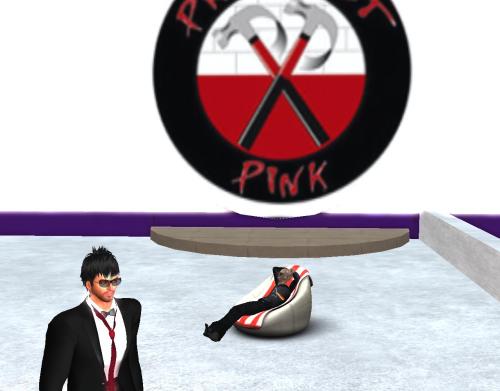 “I was last on Mistery Island, helping Blue Bear Y out with that broken orb. Do you recall?”

“Rainbow Sphere, some called it. Go back and find the Rainbow Sphere.” Good advice from Roger tonight. Thanks! 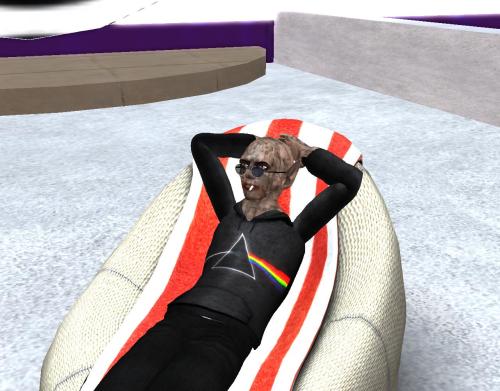 “Moe! I thought you were retired.”

“Nah, just decided to go back to my homeland,” he gruffed. “Us cartoons should stick together. Right Sandy?”

“Right. Never can remember that.”

“How about me, big boy,” spoke Teacher Felicia Mae Appletree on the other side, ready for more action if needed. She hadn’t seen a banana (or lemon) she didn’t like yet. The blinking neon head of Homer loomed above it all. HOMR. Jeffrey Phillips decides to ask.

“Did you mean Homeland? Or *Homer*land?”

Pause. “Why don’t you go see for yourself,” then came the answer. On cue, the music started next door, a Residents piece this time (“Walter Westinghouse”).

Homer was about to eat 12 boxes of 12 donuts live before a TV audience and then spray paint a pig and some other stupid stuff, so Moe said. “The kids eat it up,” he explains while Homer quickly downs his first, second, third…

“Any word from Sally lately?”

“Not since Milwaukee,” he hiss-spoke from his wheelchair.

“He hadn’t heard from Sally in a while, Wheeler, not since what he indicated were his Happy Days, before she left.”

“Nugent — did that name ring a bell? We’ve heard Sally also go by that alias.”

Wheeler frowned from her position across the Blue Feather table, knowing in all likelihood she wouldn’t have made the same error. “Let’s get down to other business,” she then said, patting the top of a large pile of papers before her. He didn’t seem to understand the gravity of the situation. Collagesity needed him there more than he was!

“Well why don’t you just f-ing take over again, will ya?” he exclaimed later in a fit of exasperation. And they were only about 1/5th the way through the pile still.