I was on a trail again, per usual. A Yd Island profile led me to here: Fonzerelli Docks, a New Babbage location which seems to have seen happier days in the past. Former owner: C. Thetan of Nova Albion. Ahh yes. Our Second Lyfe just keeps pulling surprises on me. I figured it was this location that “Fancy (Dress Ball)” Sally (Nugent?) fled from her creator we talked to a couple of posts back, but I’d have to place her here if so. No problem! Let’s meet up with her at this Ruby’s Pub, apparently a popular local watering hole and just next door to the docks. 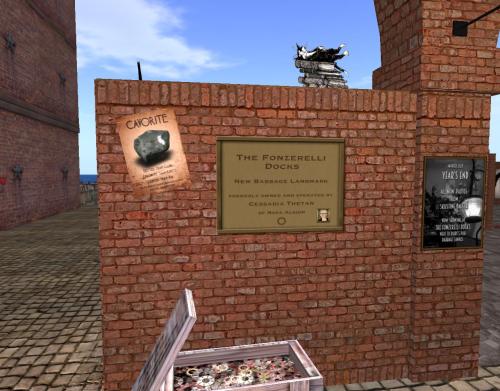 Turns out we met at Merryman Pub on the other side of the docks, I’m not sure why. Yoko Ona was there, talking about eggs and the whites of eyes. Linda Halsey showed up and they had a punch fight, one pulling for Salieri and one just pulling hair. Finally Sally arrived, declaring herself Sally Fancy and Nugent no more, and everyone settled down and became curious and started asking her questions about her new and also former life with Halloween Jack at Phantom Hill and perhaps some other places. And of course about who we might call Dr. Not Mouse, because he wasn’t, and who created Sally and Jack both and gave them a starter house next door to his Phantom Hill Castle where they raised designer horses and played cards until midnight every day, sometimes poker but also sometimes Miles Bourne the French road game. And that’s how they met the aliens who broke down over Highway 70, Bert and Jenny, as if the latter game had moved into reality, which is truth. They looked and looked but the most valuable card, the Right of Way, was nowhere to be found. The aliens Bert and Jenny suggested under the table, and then in the kitchen, perhaps where they were slicing bread between hands for sandwiches. The aliens got the association as well. Nowhere could it be found. Bert and Jenny were here to stay.

“We ended up playing Miles Bourne most nights,” Sally explained, “but it was like the German autobahn in there. ‘Fasten your seat belts!’ Jenny would always exclaim after the cards were dealt, and it also always ended in disaster. We were just recreating the wreck over and over.”