Here’s a Sunklands blog post from June 2015, over 1/2 a year before the start of the first Collagesity photo-novel, that seems pretty relevant to new topics in the current one, 27 in a series of whatever. It concerns the name origin of Austra, initially found spelled out in large white letters in the middle of the Nautilus continent online map from early 2012 and which now comes in both Upper and Lower flavors. I plan to provide follow-up material about some playing cards along with a monkey in the same highlighted Austra (band) video but first things first. Enjoy!

I checked out the name Austra and didn’t come up with much. Top of the list was this Canadian electronic band I hadn’t heard of before, but which is apparently quite popular now. I perused their videos and selected this one at random. It’s the official video for a track named “Lose It”, which turned out to be a single from their debut album “Feel it Break”.

47 second into the 4:39 long video this image flashed before my eyes. 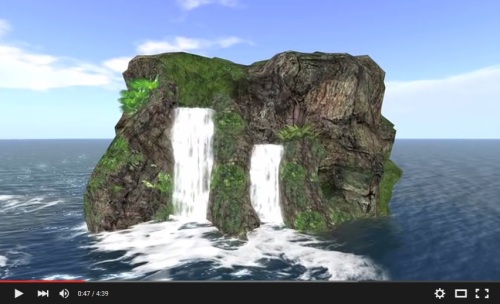 “Is that a Second Life waterfall?” I quickly asked myself. Turns out it was: googling “waterfall + “Second Life” instantly produced the following link and image from the Second Life Marketplace. In fact, I’m pretty sure I have this very waterfall, a freebie, in my current inventory.

*That* certainly seemed synchy since I’d already linked Austra and Second Life in a totally unrelated way. Note: the name AUSTR_A on the Nautilus continent map clearly comes from Austria, with the “i” dropped for a spell for some odd reason [see below]. Soon it would return; AUSTRIA restored. Perhaps now we can glimpse a psychic slant to this mistake. 🙂

4 months ago Apleeza wrote in the comments for that video:

“Those Second Life pictures in it. If you listen to the lyrics it actually looks like the song is about a guy she fell for in Second Life.”

Then someone quickly pointed out that the lead singer is a lesbian. There are some more rather quick flashes of Second Life in the video, but nothing I could wrap my brain around.

One more item before I perhaps leave this topic. I’ll quote from wikipedia, and highlight the synchronizations:

“They [Austra] played a number of early shows under the name Private Life before learning that another band was already using the name; they subsequently named the band after Stelmanis’ middle name Austra, which is also the name of the goddess of light in Latvian mythology.[3] Austra used to include twin backing singers Sari and Romy Lightman of Tasseomancy. Keyboardist Ryan Wonsiak of Ze and the Boyfriends makes up the quartet.[2]”

The Lightman twins are also featured in the “Lose It” video. Private Life could be resonant with Second Life. I haven’t found out what the playing cards mean in conjunction with Second Life images within.

One response to “flashback friday”