In his old cave, he worships the wife before entering the coffee shop proper. Here lies truth, even though the shop itself is now broken. Broken truth, then.

“You’ve mutated so much it’s hard for me to recognize you these days. If it wasn’t for those eyes…”

“That’s what I’m here to talk about,” interjected Ruby, now our familiar green grey alien. “The *I*.”

Seven, Axis knew. The six and the seven. “I know, I know. I shouldn’t have killed that old man with the kane.”

“Michael,” she said. “Plank of wood… I’m getting.” She became embarrassed about her wealth of knowledge and decided to reel it back a bit. Starting: now.

“Well, that’s what led me to *here*, yeah.” Axis took her in more. What a long way she’s come from his little Ruby, a naive girl of 15 1/2 not ready for the world at large. And here she is, beyond the world entirely. Extraterrestrial. Should’ve known, he thought. She always had the — best of hearts. Didn’t belong on Earth. “Well… you’re in charge,” he found himself saying. “You’re the boss. Where to now?”

“You’ve found the cave, good,” she said calmly. “Now you must find the art. Collage or painting? Choose.”

He looked into the multicolored flower with this. He knew he was being hypnotized but decided not to fight. Why keep going? Ruby was beyond what he was — a pure heart, a pure soul. He was ready to give it all up, the world conquest, everything.

She didn’t ask him to show her the other one, the person he stares at in the mirror. Probably already knows, he realizes. And doesn’t care. So… perfect. He must worship her as well.

She woke up with her mission. Go through the SOS flea market toward the plane. Find the hole in the fence and turn left. Therein lies the answer to everything, or at least 42. What’s within will not be what it seems.

The plane, check. But not the flea market before her. The cat on a nearby plank of wood meowed an answer but it was not 42. Something about dinner time being only 2 hours or so away now. Useless for her, although encouraging for the cat. She moves right, since left is…

In the secret basement lair of the large house to her left, biggest in town: 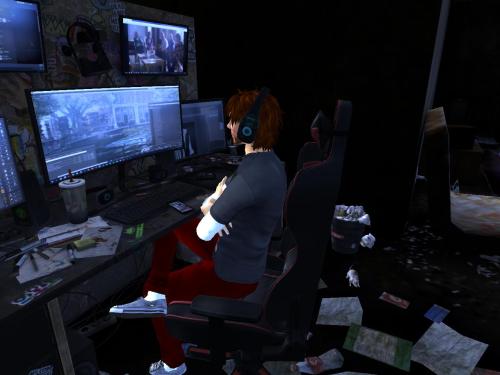 Only 2 hours till dinner time, thinks Greg Ogden with exactly the right number of G’s in his name. Better change.