“Don’t kill me sir!” the puppet man pleaded vigorously in his high, wavering voice. “I’m an innocent! I haven’t done nothing wrong, done no one no harm!” 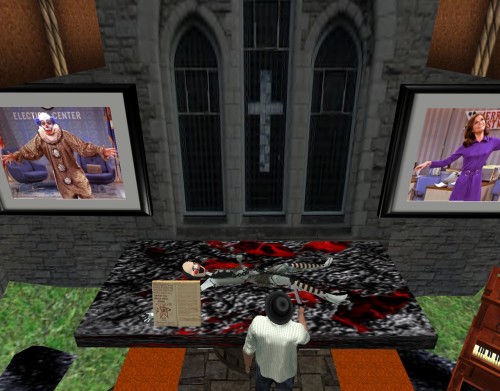 Charlie stares into the eyes of innocence, lowers the knife. He can’t do it. Charlie Banana begins untying Freedom Puppet. 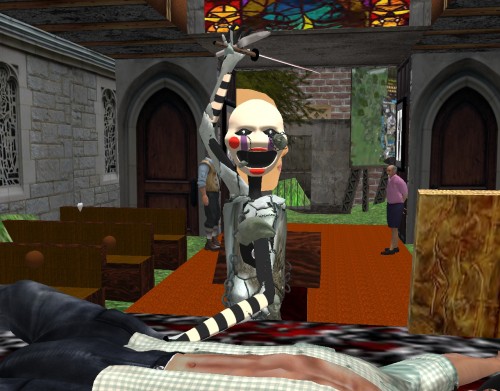 “That trick was easier than I thought,” Freedom Puppet said while quickly cutting a circle around the center of Charlie Banana. “Eat your heart out Gene Kelly.”

At her Fruity Island house boat, Parasol goes to check the morning mail. “Ahh. A real heart instead of a puppet one.” Parasol sighs. “Poor Charlie Banana. We had a good run, though.” 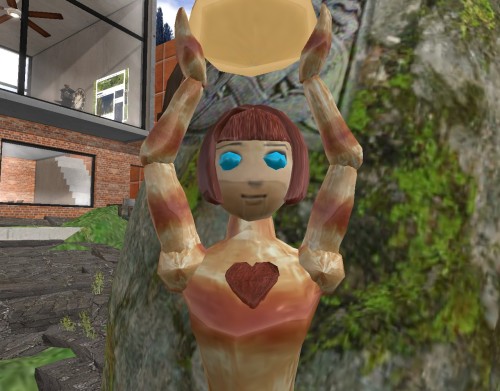 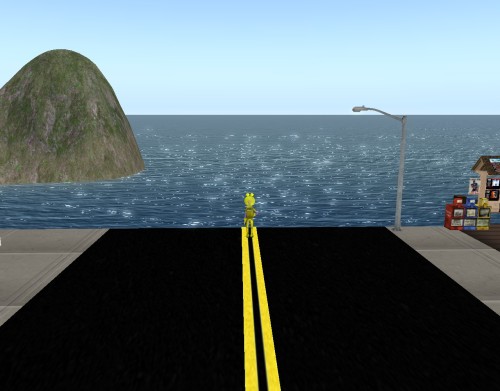 “I have 9 linden dollars to my name, Charlie. We need to go back to Rodentia and gamble again. I won last time!” 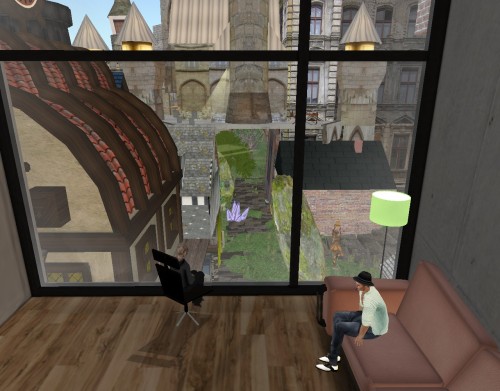 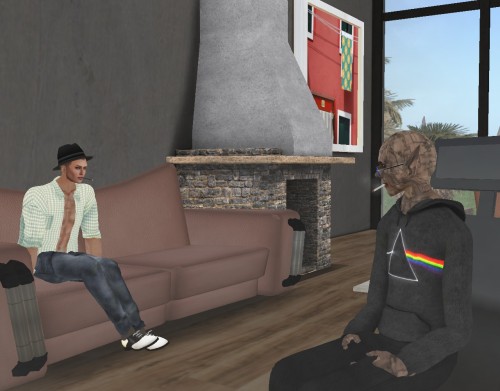 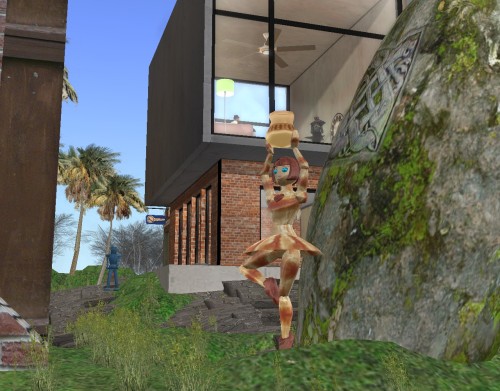 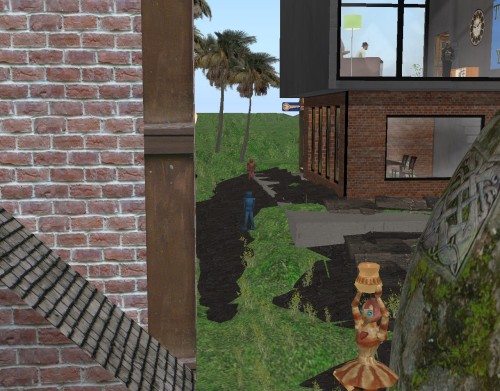 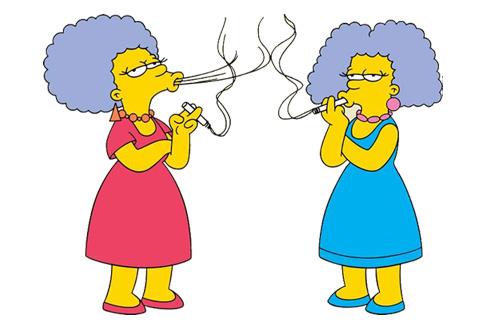 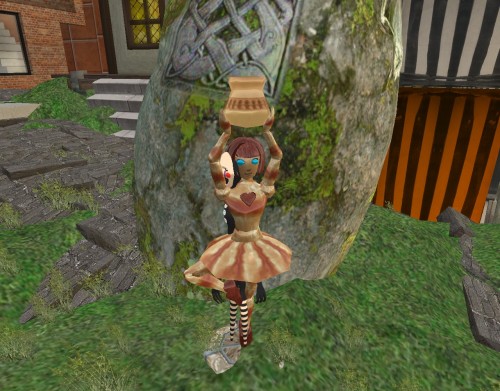 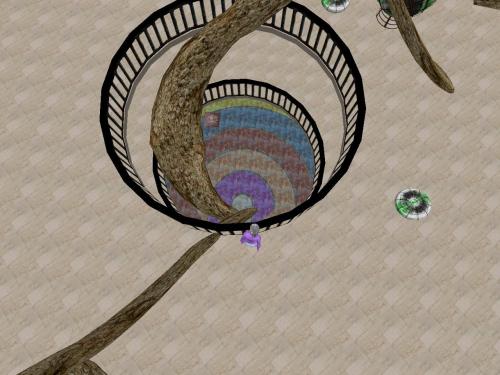 “It’s time we do something with this TILE Temple,” states Baker Blinker to the always awake Carrcassonnee. 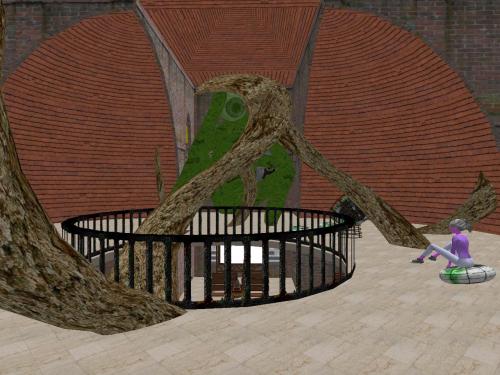 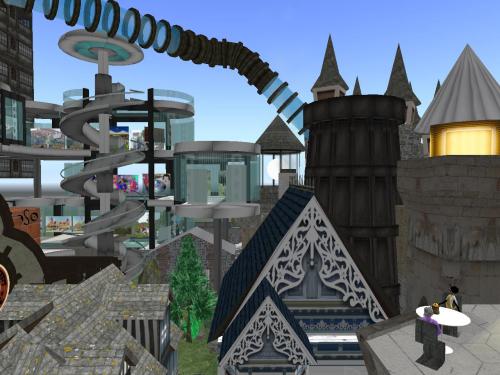 “How come you never removed the collages from SoSo South?” asks Hucka Doobie about 15 minutes into their rendezvous later in the evening. “I thought they were causing too much lag.”

Baker Blinker came up with an excuse. “I think the appearance of Jerome T. Newton changed all that. Him and Keat Owens.” She peered through the opening to her right. “Speaking of whom, where is he with our clean cups he promised. Coffee’s getting cold.” 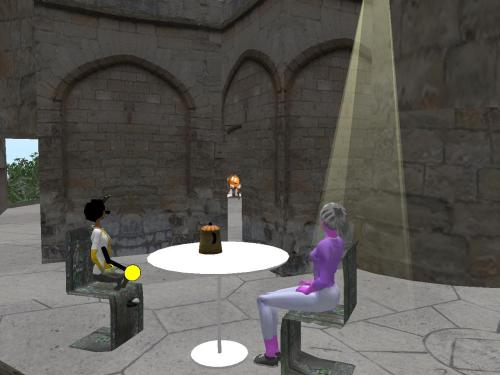 “And Steve over there” begins Hucka Doobie again, looking north now. “He’s only a dream being. But we’re not asleep. So that’s a continuity error.” 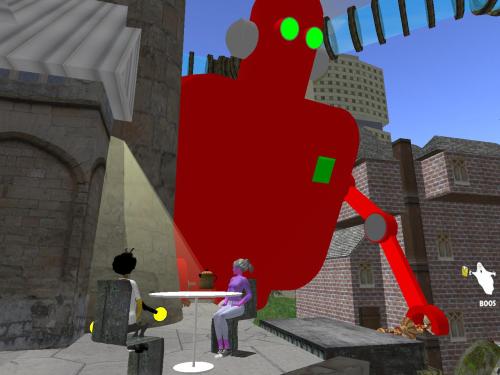 Baker Blinker blows out air. “I can’t do *everything* in this town. I don’t have enough power. I can control Collagesity North well enough but not here.

Hucka Doobie and Baker Blinker become silent for a moment. Both think of Baker Bloch and Old Mabel on New Island along with Wheeler and Karoz. Baker Bloch is the custodian for this part of town, the main part. He’s the one who cleans up all the creative clutter here from the night before. Like Steve.

But suddenly, Steve the giant red robot wasn’t holding the sideways and backwards ballerina any longer. Urch had reappeared! 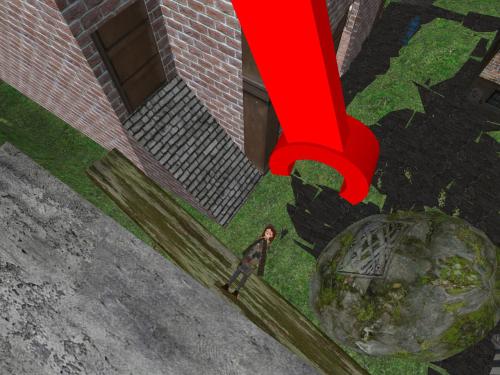 The robot went away. The ballerina returned to her rightful position on the ground directly below. 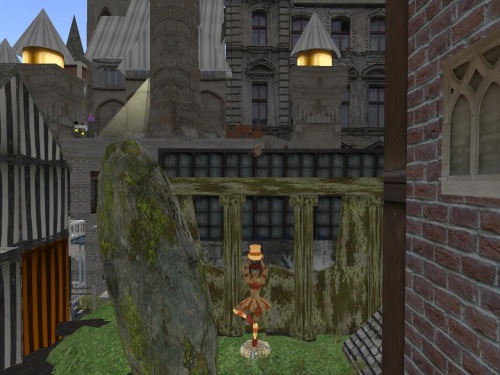 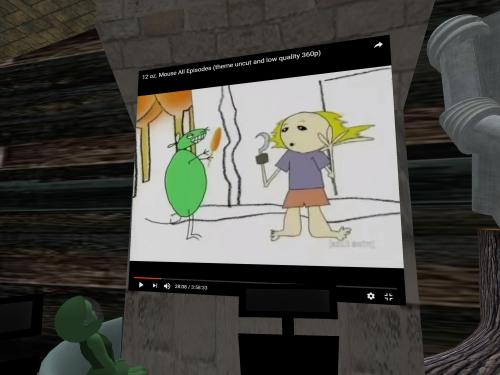 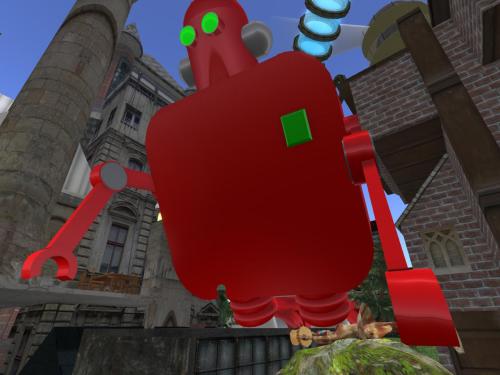 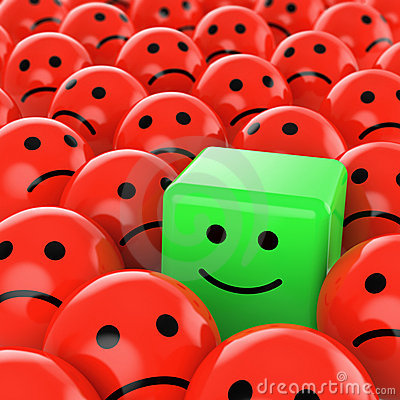 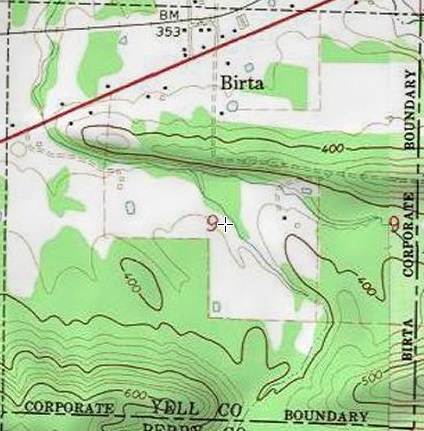 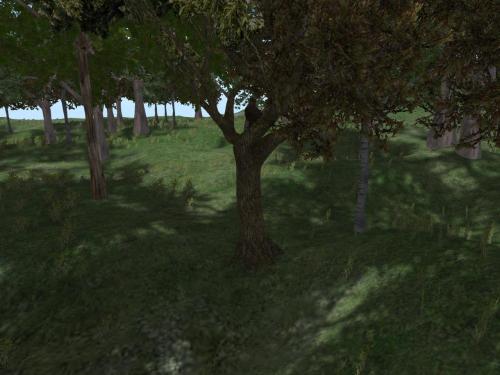 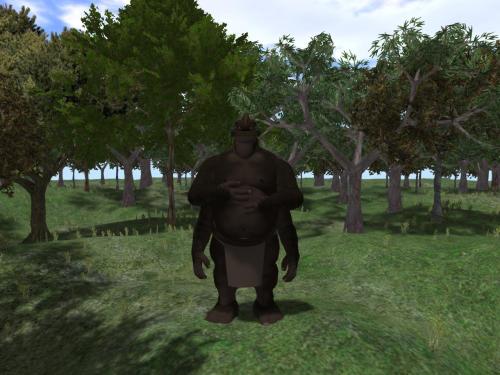 “Turns out Unch and The Librarian might be one and the same. Keat Owens The Librarian is, underneath it all, what’s called a giant besalisk, a 4 handed version. It’s the involved salamander lineage that doesn’t allow him to be burned, thus the perfect nemesis for firestarter Jerome T. Newton, who we also know now is another version of Wheeler. The ash grey marble hands were a prop.”

“This just gets stranger and stranger,” returns Old Mabel. “The Woods are too peculiar. They could easily drive one mad with their continual twisty-turny ways.”

“Yes,” states Baker, also noticing that Old Mabel didn’t mention anything about moving *away* from said woods. She was engaged for certain.

“I want to know everything about The Diagonal,” she then said.

“Here, let me just clear off some of these beer cans. And: voila.” 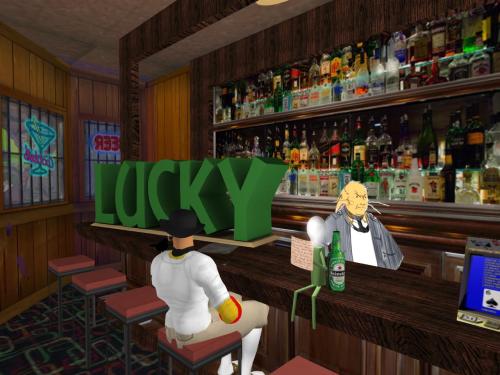 “How long did you say you’ve had this?” asked Baker Bloch.

“It came with the place,” clarified Furry Karl the bartender. “Let’s see, that would be 2005. Old Kringles.” He chuckled, thinking of the good demon he bought the bar from while it was still over in Rubi. “Quite the character. Wore a cow bell around his neck at all times.”

“This must be from the original village. But I thought it was destroyed.”

“Nope,” states Karl plainly. “There it is. You can see it with your dead peepers right in front of you.”

“Could be a copy, a duplicate,” speculated Baker.

“Well, could a copy do *this*?” Karl touches the object and produces a shower of shamrocks. 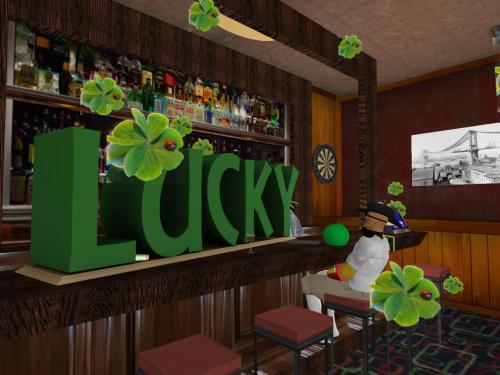 “No, this is the sign. *The* sign. The one turned over and thrown aside during the ’68 robolution. A turning point in our history and time.”

“You said robolution there, Furry Karl. Did you mean revolution?”

Old Mabel dug deeper into the mystery of the belalisk at the town library. Journal 2 contained some information, but she was determined to find more. A particular pattern in another part of the book also caught her attention this night of playing “stay awake as long as possible to avoid dreaming”. The book just fell open at the page while she was trying to push it away from her to lay her head on the table. A yawn quickly turned into a gasp. “The portal in my dreams?” 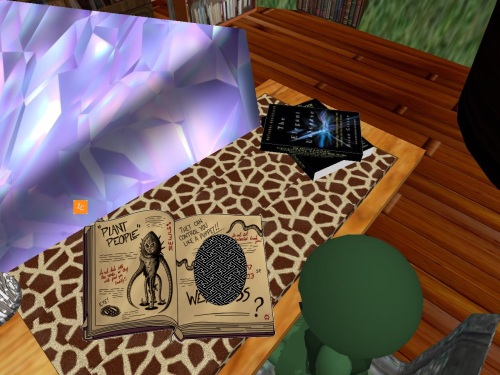 But it was too late. Already sound asleep, the monsters arrived quickly. 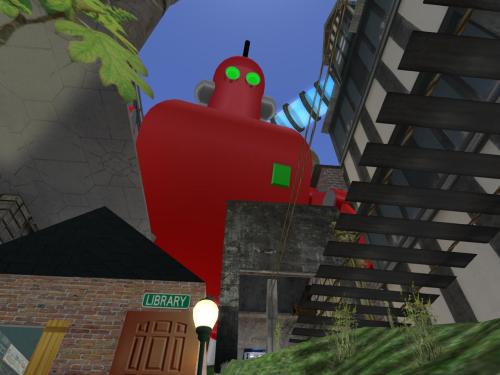 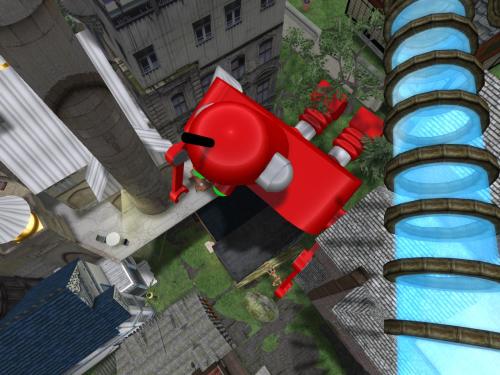 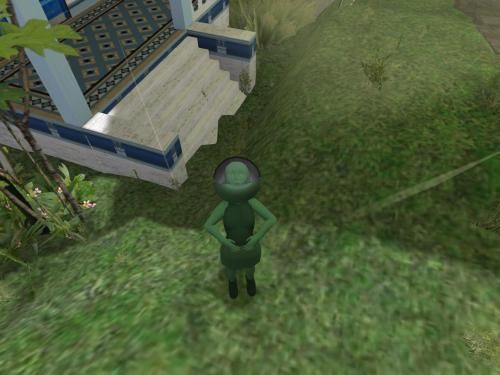