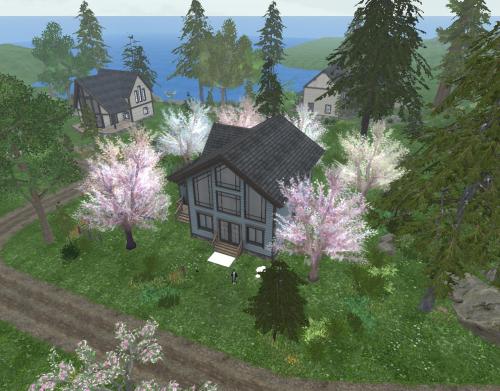 The surrounding white trees should have been a clue about the situation. Conquests, she called them at another time, another place (Horns). The mannequin in the yard (Roxanne) doesn’t want to hear anything about the making of babies; she wants to remain innocent and pure and white (as the driven snow). She doesn’t want to fall into the Black Hole at the center of the Milky Way, a dreamer lost to reality. Reality is *here*. There is no black behind the white for her, being, you know, a dummie and all. Simple, perhaps. A meat and potatoes kind of (wooden) girl.

Fireworks trees, some call them, but that would be more on the opposite side.

We’ve seen the mannequin before. Scarlet some called her, a person ruled by Terra: Earth. Grounded in the soil. She’ll never be tired or poor or hungry again. She thus becomes a mannequin, seeing no other recourse. Stuck in the yard, she is, with a UFO above trying to beam her back up into the sky but not succeeding. Pineapple down the road shoots a cherry red laser beam and mows down a pair of blue-not-green A_Team traitors, influencing the rocket. Frosty turns away, still cold from the grave. Homer sits on the porch. *Homer* *sits* on the *porch*.