Lengthening their draw distance a bit as Keith B. recommended, they both stared out at Clarksey from this low granite summit to the north. 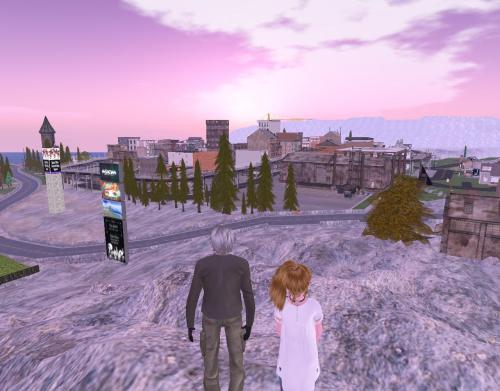 “It’s big, Jennifer,” he began again, then backtracked a bit to “…biggish”. “Ambitious,” he started once more.

“I get the picture.”

“Five, I think. Wait: four. Clovis fell into the gorge the other day. Decided it was too dangerous to stay what with his drinking problem. Flew away from Enceladus day before yesterday. You just missed him over there, then.”

“Nice people over there,” she replied. “This one guy, Marion Harding, a Cowboy, even offered to drive me over here from the airport.”

“Who was the pilot?”

She wanted to say Indian but she knew that wasn’t possible. Indian was her brother — 1/2 brother — from another mother. Like Rose — full siblings those two were. “Can’t remember,” she decided to utter, trying to mask the hesitation. Memory gap! ‘Nother one.

“Did anyone follow you?” Strange question from her old Papa. But there *was* someone, someone black. Check that: someone named Black. A, um, black man. Doubly black.

“No,” she issued. “No one. Strange question from you actually.” She took drama in high school. She could still act a bit if necessary. But she’s remembering (!). A trio of men: Cowboy, Indian, Black. And behind them: still fuzzy. Maybe someone named… Frank?