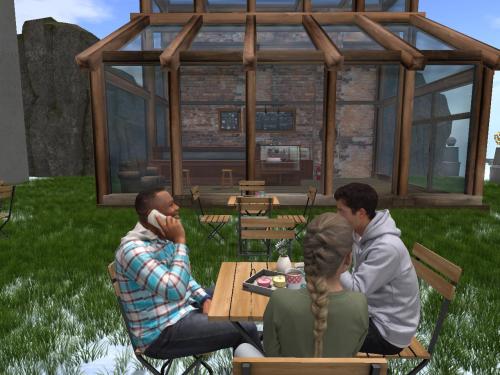 “No, *I’m* here.” He smiles broadly at John across from him, who grins back a bit. Becky looks away, lost in thoughts of some kind.

“Yeah, yeah I already told you that. *I’m* here. But where does that leave *you*?” (more snickers)

Julius hangs up, tired of the running gag. It had run its course, which was a needless mini-marathon, he felt. Time to get back to work anyway. He makes a mental note not to call him again until he truly does figure out where he’s at. Because he forgets all the time. Now… where does he work here?

The waiter comes over, Bob I believe. “A phone call for you, Mr. Nance. It’s Mr. Nance.”

“Oh… thanks.” Receiver in hand again. Bob cleans up for the people who just left. Big smile, preparing for the best but expecting the worst. His twin had been missing for hours, days, weeks.

Baker Bloch looks on, pretending to eat grapes but just spitting them out into his napkin when the waitress has turned away. Omaha, I think. But from Oklahoma, or comes from within such. Not Nebraska, although some people just won’t get it out of their head it’s at least Kansas, a compromise she’s come to live with. Dorothy, others call her. Dot.

Hucka Doobie joins him; turns away from Omaha so she won’t accidentally spill coffee in her lap. “Stop spitting, my love,” she requested, like a mongoose.