“So I went to the middle of The Cross, the middle of Lineside (which is the same), just to see what was there. The well was gone, you know, the one Lou and Morris declared was the center of the world or something.”

“*Well*,” she exclaimed back. “I never.” Because she knew the center of the world was in Arkansaw, some say Miss Ouri. But it was probably Arkansaw. Or not. Debate for another time and place.

“Yeah, I had a hard time getting there with the ban lines and all but I finally found it. A rock, you see — ‘nother one. And a grassy little hill attached to it with water sprinkling all over the place.”

“Your mouth is getting lazy again,” the other with the first complained, probably Venus since she was more sharp mouthed, perhaps part bird herself with the beak and all. But that was just (in) a dream.

“Yeah, those too,” admitted Blue Bird, looking to her right and left as they approached, threatening to close her in on this very spot in the center. Or as close as she could get. “I touched the green star near me. I began to dance. I seemed to worship the rock, become one with it even. That seemed to drive them away. I was alone again, but I kept wanting to dance and worship. I realized I was someone else in the moment.”

In her mind, she saw the black figure approach and then recede. Just like a toy. 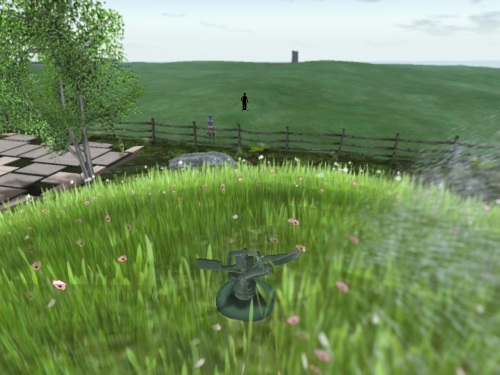