“I’m not ready to let go, Charlotte. I can’t give up Nauty that easily.”

Charlotte knew Nauty was short for Nautilus but she couldn’t help but think of other things at the time, especially the way Edward was indicating. Like Dodgey City. Poor Jem! Stuck in a dead end bookkeeping job after buying too many vowels in that game of hers she calls life. Spaceships, pheh. One day one of them will come down and save me, she said on their last day together, after the butcher shop and attached brothel shut down, kicking her out of the nest. Well, this eagle has *flown*, she declared. 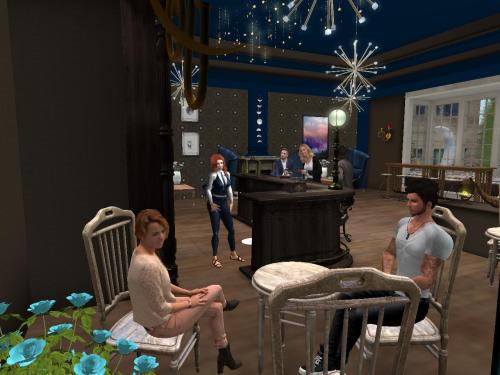 Orilia the bartender couldn’t help but listen in. So this is the legendary Edward Daigle she’s heard so much about over the last week, she contemplates, ignoring her bar customers for now. Edward has become her *main* customer fer sure. She walks over.

“Anything, to, ahem, eat yet?” She was embarrassed. She felt awkwardness of mouth was a weakness and attempted to be all-time smooth in that department. Yet the throat clearing…

“Fine,” he said crisply, and raised his hands from his lap. Now maybe I can think of something else, thought a relieved Charlotte. “I’ll take a salad, extra ketchup. You?”

How rude (!). Ordering before me. “Just the ketchup,” she decided, making a quick meal of it. Besides, Edward had other people to see, she knew. Other places.

“Comes with mustard,” spoke Orilia, not writing it down. “Is that okay?”

“Mustard will be fine,” said Charlotte, “but put it on the side.”

Orilia then looked from one to the other. “Drinks?”

Just then, someone else came in the bar that Orilia would subsequently ignore. But not Charlotte, not Edward. Because this was none other than Jem of Dodgey City, also flying the coop.

She sat down at a nearby table, waiting for Edward to finish. She brought her own drink.

“Fiiiiiiiinnnnnnnnnneee,” he said before the time adjustment.

Charlotte looked over as the dust was still settling. “Jem??”