“Now I think it’s logical that I keep the seat here next to the refrigerator, because of my little bambinos I have to fuss with all the time — pouring milk over them to turn them into lattes, icing the lattes, so on.”

“Here we go,” muttered Wheeler Wilson across from him, who had already requested to be addressed by a new name: Flip Bean. She flipped her hair lightly when saying this. Baker nodded. It was done. On to round two.

“Welll?” Baker wanted a likewise response from across the table. Wheeler has her name, he will have his fridge.

“Fiiine. And another request while we’re on the subject. Axis here is not Axis any more. He’s Newt. He won’t even answer to Axis any longer.” She turns toward him. “Will you Newt?”

Newt thinks about not replying for a joke but then decides against it. Wheeler, I mean, *Flip* is pretty serious when she sits down to the table here. Down to business as they say. “No,” he says.

“Good. So it’s settled. New names for us, and a refrigerator for coffee boy over there. Anything else? I have some hiking in the Himalayas to get back to.”

“Grassy,” Flip guessed about Baker’s next topic. “Took his seat away. Not needed right now.”

Baker Bloch could see his seat next to Flip’s clear as day. “Toys must be represented,” he kept firm. “Besides…”

“… there’s a chair already there?” Flip guessed correctly again. “In my reality there isn’t. We agree to disagree about that.”

“Okay,” Baker began again. “How about this. I keep calling you Wheeler in these here meetings, and the toy will be banned from same — toys in general.”

“Explain,” she asked. This was the final decision, she realized. Then it was off to meet Stan in Timbuktu to conquer K-2 again. Good ol’ Stan. And Axis doesn’t mind since he’s Newt now. He’s completely under her control.

“I… just can’t get use to calling you anything but Wheeler. And our one or two other readers would appreciate the continuity as well I’m assuming.”

Flip answers by rattling the ice around in her water, melting fast. “*I* want a refrigerator too, then. I have needs as well: wine, liquor, tea. A fridge back there behind me and I’ll be Wheeler, he’ll be Newt (still), and Grass(y) will be out on his ass. Deal?” She leaned over the table, extending her arm for a shake. Baker thinks about quickly reaching into his fridge and handing her a leftover chocolate chip one but wisely decides against it. He knows, like Newt, that Wheeler is totally serial in these kind of meetings, as the young’n’s might say. She wants the business done so she can leave and get back to what she was doing. Hiking in the Himalayas, surfing in Wakiki, bungee jumping in the New River Gorge — could be anything for the thrill seeker. Just last week it was rhino riding in the Serengeti. Next week, maybe a space walk even — who knows?

She comes as Eyela to the next Table meeting. Space walk it is. 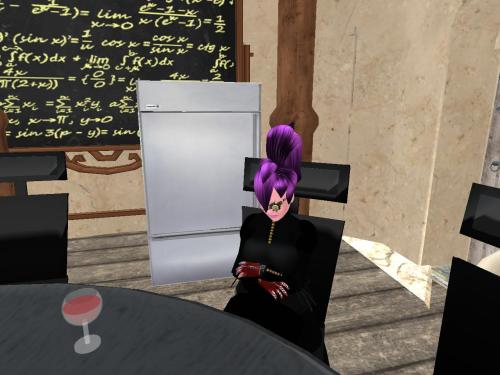