“You’ll need to change into Miss Ouri (again). Disguise. (pause) I need you to tell someone they’re dead.”

“To you,” she attempted to clarify.

“Okay.” She planned out the strategy. She knew who would approach her. She found herself becoming nervous. Okay okay, she calmed herself. You’re the head librarian of a mid sized University — (a library) trapped in a castle; that’s the twist. You were instrumental in bringing a special collections room there, red-orange mahogany in outer appearance. Inside: the Arkansaw monster book. Along with a lot of other books and manuscripts obviously. But the Arkansaw one is particularly attached to *you*, being Miss Ouri and all. One or the other had to go in your estimation. Wheeler, presently in the form of his 3rd cousin Tessa — or Tessie to him — said all this aloud.

“Good good,” he expressed after hearing. “I’m going to stay here and wait out the rest of my sentence. Chop wood at the cottage I’ve picked out, etc.”

Turns out chopping wood meant just that and not a euphemism. Good for Eddy (our Edward)!

“And stay away from that pot shop!” she said while walking away. But he didn’t. 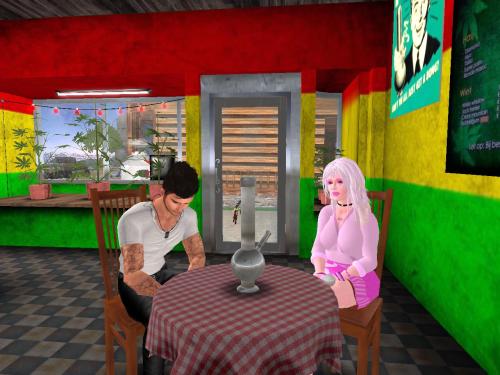 “Thanks for meeting with me, Jem.”

“For the weed, you mean.” Because they’d been seeing each other lately, rendezvousing in clandestine places all over the grid. Like this.

“Yeah.” They’d only taken one hit apiece but they were out of it. Far corners of space kind of out. Jem could see Muff-Birmingham looming in front of her, the sphere that is also a cube. Light side and dark side; jungle and desert or at least plains. Plain to see, she couldn’t help add. “Where are you now?” she said, focusing on him instead of the inside. Trying, anyway. Best to communicate to the other when getting too deep. And where is there some wine around this place, the red to counterbalance the blue?

“Home,” he replied as simply as possible in order to communicate at all. 3D. 26 1/2 years it had been. He cried more when he gave it up than when he sold his childhood home, one replacing the other in a way, in a manner.

He looked over at Jem, held her hand, held it tighter. Because he realized she’d probably be dead before he went back. He’d make the most of these 2-3 months.