I’m perhaps planning to head down to Mythopolis tomorrow for more hiking fun so I wanted to make sure I generate the text for this related post beforehand.

Last Sunday I parked my car at a strategic place and walked the railroad to Edwardston, prominently landmarked by a historic trestle spanning Silver Creek.

I did not walk across the trestle, and apparently it is against the law now to do so. Not when I was a kid, however, or at least there was no sign there stating such. But now there is. Never mind, because my goal was Edwardston itself, which lay on the near side of the trestle, and where the 2 below photos were snapped. The first shows the waters of Silver Creek (left) and Edward Creek (right) approaching each other to meet just below the trestle, with Silver being the much larger flow and Edward a mere tributary of it. 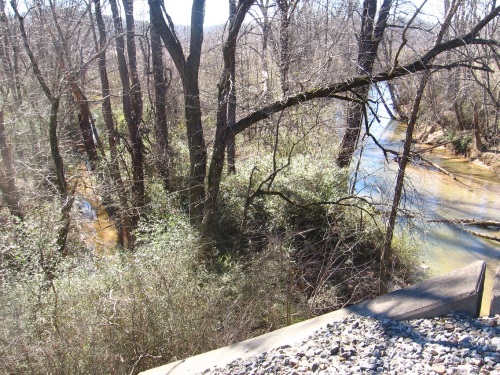 The actual juncture of the streams. I remember the sandbar being extended more at the peninsula representing their confluence, kind of like a miniature Manhattan. Correspondingly, this was suppose to be the site of Edwardston’s large downtown, with the city itself about the same size as our Chicago. I don’t recall the sandy island in the river you see just beyond — pretty certain that wasn’t there when I was growing up. We’ll be mentioning another formerly unknown Silver Creek island of similar if larger design in a moment. 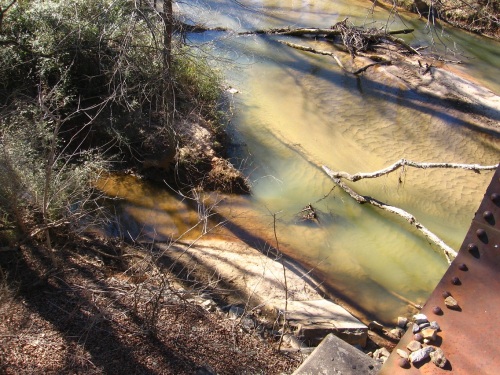 And the alien style graffiti face is still present below the trestle, just like I found it in 2008, I believe. It almost seems that the image has been repainted, but I doubt someone would take the trouble to do so. This is a pretty out of the way place, and not on any beaten path of any kind. Most likely it was just originally crafted with some quality spray paint — present theory. 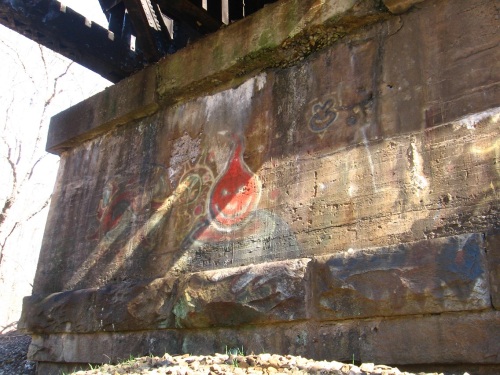 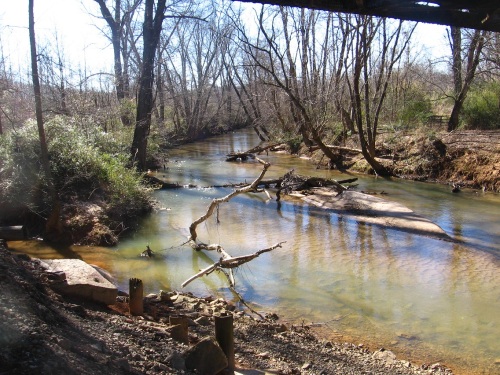 … before moving up Silver Creek toward Pattonsburg, about a 1/3rd of a mile northeast. Like Edwardston, Pattonsburg was a Wazobian city of some size, although not quite as big as the former. I rated it the 9th largest city of Wazob, while Edwardston came in at no. 3. The below picture is of Patton Creek which empties into Silver Creek just below “downtown Pattonsburg”, or at least it use to. Now its waters have been dammed by beavers, and any flow beyond must be underground, as the creek bed between here and Pattonsburg about a football field to the north is now dry. Again this was different when I was a teenager…

… as was Pattonsburg itself, seen in its present state in the below photo. No, when I originally found this place in my early teens, bamboo was growing all over the area viewable in this picture. In fact, I began construction on a bamboo hut here, and perhaps when I cut the bamboo a chain reaction set in, throwing a delicate ecosystem offkilter. At any rate, there is basically no bamboo left, although I found a little this day further south.

The stream is dry, the bamboo is gone. This is an almost completely deenergized Pattonsburg. The city is no more, at least in this location. *But* we’ll come to that interesting “new island twist” in a moment. 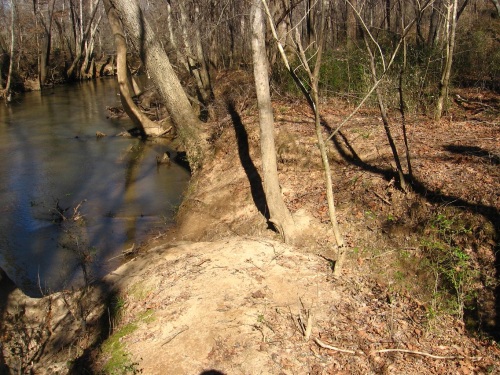 A bridge found in what I called Bananaboro, yet another designated spot for a fantasy burg and ranking no. 8 in size for Wazob cities. Bananaboro and Pattonsburg are intimately tied. Besides being close in size (no. 8 and no. 9 respectively) they lie at either end of the Patton Creek, and also were part of a pre-Wazobian country called Or, which later became the Wazob province of Topaz after its consolidation (more on that soon enough).

But the larger point is that the woods surrounding Pattonsburg and Bananaboro — the entirety of Or, in effect — *has remained intact* since my youth. I realized this area still had mythological relevance. You *can* go home in this case, or kind of pick up where you left off.

And I just realized in looking at the remaining photos of this post that I did not include any picture of that larger island I mentioned. Well, let me just describe it a bit. It lies close enough to Pattonsburg to be within its “metro area”. To be more precise it seems to lie on the west side of a place I called Argent — yes, another Mythos city, bearing a no. 16 ranking this time, and the third largest of ancient Or. I’ll have more to say about Argent soon. I might attempt to take more pictures on Saturday of the place — we’ll see. 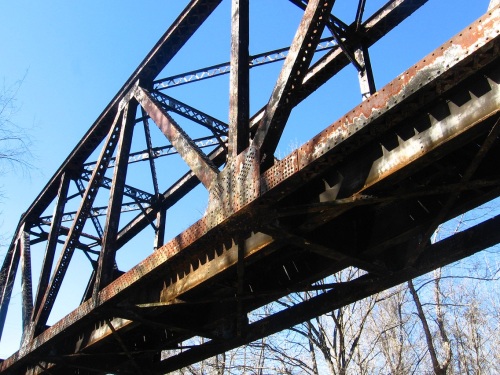 This day I also hiked to the south of Edwardston, or between my mom’s house (which was called Britonia according to my mythology, and the *number 1* city of Wazob (!)) and the railroad trestle. Another interesting fact: the wetlands of Edward Creek have actually been restored since my childhood by a new landowner. I don’t know how this was exactly effected, but the creek is now very wavery and sinuey, where before it basically flowed straight as an arrow. Edward’s Creek has actually *been improved* since my growing up days in Mytholopolis. Another exciting note.

This is a stream I called Green Turtle Creek. I remember it being larger. And not as orange.

Edward Creek as it meanders toward Silver Creek and the railroad trestle through the Edwardston outskirts, one could say. 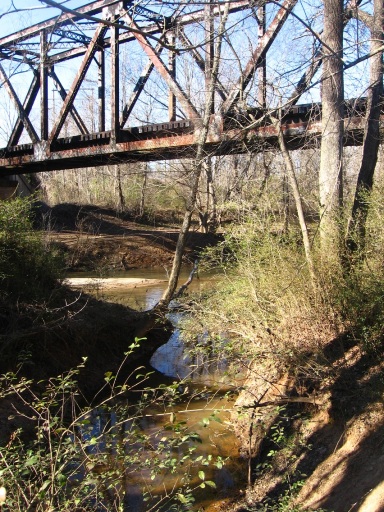